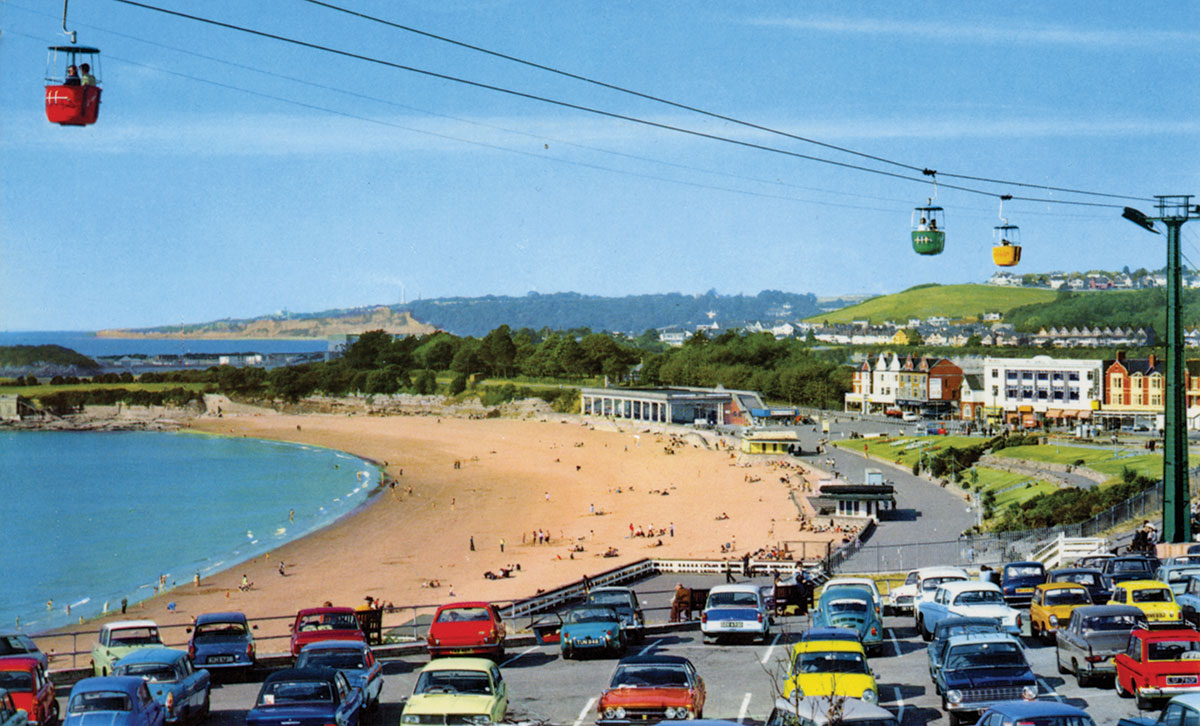 Ron Brown was at the beach car park by 6.30am that morning.

Like every other morning for the last 29 years, 6 months, and 3 days.

Except today was the end. But it was also the beginning.

It would be the last Monday morning that Ron would ever work as the car park’s only attendant. It would also be the last time he’d see Barry Island and its Old Harbour in the serenity of early Monday daybreak.

He had a morning routine. His bedside alarm would be set for 5.57am exactly. That way, the weather report would be the first and only thing he heard. He’d turn his radio off on the hour mark at 6am. He last listened to the news 29 years, 6 months and 3 days ago. It had been depressing then. He figured that he wasn’t able to help the world and its problems. Listening to them all made him sad and feel utterly helpless. So he decided that instead, he was going to focus on his own life. And his own future happiness.

At 6.30am, the day-trippers would probably still be in bed; except maybe for the organised ones who’d be up making sweaty cheese sandwiches with thin white bread in faraway kitchens. But 6.30am was perfect for Ron to get himself a coffee and prepare for the day ahead.

“How are you today, Mary?” he would ask as he approached the serving window at the coffee shop.

“I’ll be fine when I can afford a new coffee machine. This one’s on its last legs,” Mary would reply. She’d bash the machine with her hand and then she’d place two Biscoff biscuits onto a napkin for Ron.

The asthmatic machine was indeed battered. It grunted out a cup of ink-black coffee and Ron would watch as it wrung every last drop out from its innards.

“I’ll get you a new machine when my numbers come up,” Ron would say.

“I won’t hold my breath,” Mary would reply. Then they’d laugh.

Today was another glorious summer’s morning. The forecast that had been broadcast on Ron’s bedside radio promised a searing day. The early pink sky had slowly diffused into a pale blue and the cool air was beginning to fire up for the long sizzling day ahead. Ron sat himself on the rocks with his coffee, overlooking the Old Harbour, allowing the silk morning air to caress his craggy face.

For Ron, sitting on the rocks was something he did every morning, whatever the weather. It gave him time to reflect, time to think about his plan to get out of working. The only thing that kept him going was the fact that one day he wouldn’t have to do this job; that one day, things were going to be a lot better.

When that day arrived, he’d be sat on a faraway beach, anonymous, sleepy, and slowly happy. But until that day, he had to do what he had to do. Like everybody else.

He sipped his coffee that scalded his tongue and he let the hot bitter liquid slide freely down his throat. He quite liked the fierce burning sensation as it trickled down, down into his empty belly. It fired him up for the day from the middle of his being. And at 6.48am on the dot, he looked up and raised his coffee to the plane that had flown over every day since he started working. Destination: Owen Roberts International Airport, Cayman Islands.

Coffee downed, Ron made his way to his place of work — the car park. His hut wasn’t anything special — a battered wooden building that had soaked up the rains of winter and scorched and cracked in the heat of the summer over the years. It sat at the entrance to the car park and inside it sat an old armchair that used to belong to Terry, the resort manager and Ron’s boss for nearly 30 years.

The marvel of electricity had reached Ron’s hut in 1993, allowing Ron to run a kettle and a small fridge. Inside, from the roof, hung a bare bulb on the end of a piece of yellowing flex and it hypnotised and vamped the moths on long summer evenings. Ron preferred to run his radio on batteries as it allowed him to take it outside and work on hot days, especially when the cricket was on. It was his home from home.

By 7am, Ron would be at the hut, sat in his deck chair, waiting for the first day-tripper to come along. Next to the hut, he’d have placed the battered sign that read “£5 For The Day. Cash Only” so that the drivers could see it as they approached.

And throughout the morning, he’d collect £5 off everyone who came in and stuff it firmly in his ever-pregnant money bag that was strapped around his waist.

He’d only ever seen one car at the car park before 7am in his 29 years, 6 months, and 3 days here — and that was a guy who had left his wife and had nowhere to sleep apart from his car. Ron had spent an hour talking to the guy before sending him on his way, full of renewed hope for the future. A few days later, Ron heard that police had found the guy’s car down the side of a mountain.

The Monday passed like any other. The day-trippers came and went like the tide. And by late afternoon, Ron locked up the door to his hut for the last time.

He made his way up to Terry’s office and popped his head around the door.

“I’m leaving early. I need to get to the bank before it shuts.”

The bank was empty of customers and Ron approached the only counter that was open. Alys was there, as he had hoped.

“How are you Ron? What are you doing here? Not your normal day,” she said, filing away some ten-pound notes into the drawer in front of her.

“Not cashing anything today?” she asked. Ron remained silent. He simply placed two hands on the counter and sighed hard. Around one of his fingers was a smiley face keyring with two keys on it.

It suddenly dawned on Alys what was happening. Her cheery smile crumpled.

“Oh no,” she said, putting a hand to her mouth. Ron didn’t utter a word. He didn’t need to. He knew that this was the day they had both been dreading for nearly 30 years.

Under the glass, he slowly passed over his house keys; his life; his past. He kept his hand there. It was shaking.

Alys reached her hand forward to collect the keys and for a brief few seconds, their fingertips touched. It was the first time they had touched for nearly three decades. Through blurry eyes, Alys looked at the man who had broken her heart all those years ago.

Within a matter of seconds, Ron’s mind flooded with memories. Memories that clamped around his chest and suffocated him — the drunken night in the Ship Inn; standing waiting for his pint to be pulled while Alys plunged her hand into his trouser pocket and emptied the contents on the bar; the smell of the cleaner that the barman used on the table at throwing out time; the taxi driver who wandered in looking for his fare and who had lost patience and left.
Ron remembered the drunken walk home in the rain through the sleeping streets; the sheen on the rooftops; the wet cigarette; the fumble for the door key; the lingering smell of roast dinner that Alys had cooked the night before; the first kiss in the hallway; the half-made bed; the memory of her heart beating against his; the sense of sheer abandonment through the lonely small hours; how he held her in his arms as he began to sober up; the sound of the town hall clock chiming four; drifting off to sleep while the rain hammered down outside; the awkward morning after.

He remembered the blue walls of the clinic they visited together two months later; the words of the doctor who told them that she was due around Christmas time; the day they rented a room; the cold cup of coffee that the nurse handed to him while he waited in the corridor; holding Billy in his arms for the first time; the overwhelming sense of fear; the day they realised that it was never going to work and that they were best going their separate ways; the day, as a confused young man, he promised her that he would take care of them for the rest of their lives.

“Thank you. Thank you for everything,” said Alys.

“All the paperwork is in order. You don’t need to do anything. You can move your stuff in whenever you want. I still haven’t finished building that garden wall though. But it’s all yours.”

Alys clenched her hand and held it to her mouth. She was hoping that it might stop the tears but it didn’t.

“Take good care of Billy for me,” said Ron, his voice breaking.

Alys pursed her lips and nodded in agreement.

Ron ran his eyes over her pretty face one more time; over her grey roots and over her earrings.

“Always,” was all she managed to say. He placed his hand on the glass between them.

“There’s milk in the fridge and Custard Creams in the cupboard. All the bills have been paid for the rest of the year. It’s all yours, lovely head. Goodbye.”

He started for the door but stopped and turned for one last look.

Alys smiled and waved, a tear rolling down her cheek.

And with that, he was gone forever.

It wasn’t until 9.30am the following morning that anyone had noticed that Ron wasn’t at work. Terry was on the phone to the Council.

“Hi. This is Terry here from Barry Island. Yes. Can you send a replacement car park attendant? Ours hasn’t turned up this morning. Never known him not to turn up before.”

There was a prolonged silence before Terry spoke again.

His mouth dropped wide open; Terry placed the phone back on the receiver and slumped into his seat.

For nearly 30 years, Ron had played this moment out in his mind.

On the tray in front of him sat a small transparent plastic cup. At the bottom of the cup was a glug of vodka. And next to the cup was a chilled can of Coke, the beads of condensation catching the morning sunlight.

Ron slowly lifted the cold can and pulled it open. Its sweet crack split the still air of the aeroplane. In his left hand, he lifted the plastic cup and brought the two together in a long-awaited marriage.

He took a sip, toasted himself and let it slip down his throat. For a moment, he let the small bubbles fizz on his lips and the inside of his mouth.

He took a deep sigh, closed his eyes, and relaxed back into his Premium seat. His mind drifted and he thought about Mary, far below him and he wondered what starting the day would be like without him. She’d be taking delivery of her new coffee machine about now. He thought about the sweaty cheese sandwiches that were being made in homes across South Wales.

He thought about Alys, who would be watching TV in his old house — now an official homeowner. He hoped that she had found the Custard Creams and he hoped that Billy would stick at his new job. And he thought about his half-built wall. It would just have to stay that way.

Later that day, Ron’s plane would touch down at Owen Roberts Airport, Cayman Islands. He’d collect his small travel bag from the carousel, smile to himself, and start his new life in the Caribbean.