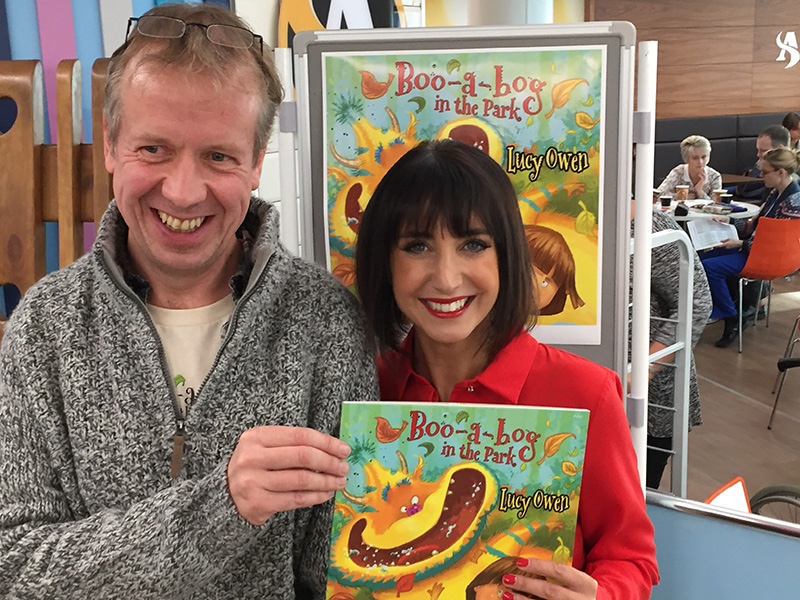 Lucy Owen is one of the country’s most recognisable broadcasters. Living Magazines caught up with the newly-published author

She appears in homes across the country most evenings and her charity work has helped raise vital funds for those in need. But for broadcaster Lucy Owen, writing her own book wasn’t something that she ever thought she’d do.

“My dad was a solicitor when I was younger and he worked on Vincent Kane’s radio shows. People would phone in and ask Dad their questions and Dad would give them advice.

“I remember going along to the BBC studio in Llandaff as an 11 year old girl and being fascinated by the whole process. I was sat there thinking that everything was going out live to homes across the country – to me, that was just extraordinary. That one moment really inspired me and several years later, I wrote to Vincent Kane asking for his advice as I was looking to get into broadcasting and current affairs. He got me some work experience working on a lunchtime radio show and that’s where it all started.”

“I was lucky to spend a lot of time in the North Cardiff area growing up. Even back then, I was aware that the area has the best of everything. There’s so much on your doorstep – in one direction you’ve got fields and greenery and in the other direction, you’ve got a bustling capital city.”

Lucy is now the established face of Welsh TV news and has been for well over twenty years. She began her broadcasting career at BBC Radio Wales as a researcher, and later progressed to a reporting role. She then moved on to co-presenting for a features programme. She joined HTV Wales in 1995 as a newsreader for regional opt-outs during GMTV, and between 1996 and 2007, she co-presented Wales Tonight, the regional news programme on ITV Wales, broadcast from Cardiff.

Lucy also presented on the now defunct ITV News Channel, and was also seen anchoring the main ITV News: Lunchtime News, Evening News and Weekend News. She signed off from her last edition of Wales Tonight on Friday 19 October 2007. She now appears on Wales Today.

But for all her TV work, she is also renowned for her endless charity work, particularly with the Welsh Children’s Hospital charity, Noah’s Ark.

“I’m very lucky to do the job that I do. I feel very privileged that I am able to give something back via the various charities I try to help. My work with Noah’s Ark is very important to me and I love doing it. As a parent of an eight year old, I like to know that should anything happen to him or to any other child, that there is a welcoming place for them to try and get better. The Children’s Hospital is an amazing place – everything from the colourful lighting to the incredible staff there. The children there are amazing and it’s important for me to help them where and when I can.”

Lucy’s work with Noah’s Ark took an unexpected and exciting turn earlier this year when she was helping plan ways to boost funds.

“We were having a fundraising meeting back in May earlier this year and I suddenly hit upon the idea of writing a book that could raise money. I’ve been writing as a hobby for many years and as soon as I mentioned about writing a book as a fundraiser, the charity was backing me all the way.

“Boo-a-Bog is about a little boy called Tom who finds it difficult to make new friends. It has three voices – firstly the narrator, secondly Tom himself, and lastly the monster. The book was launched in mid November at the hospital with my husband Rhodri and my son Gabriel there. It’s been a real family affair, with Rhod translating and Gabriel coming up with ideas for quizzes and games at the end of the book. The theme of the story makes a good fit with the charity too.

“Writing the book has been a bit of an eye-opener into the world of children’s publishing. There are lots of different things to be taken into account and the story we’ve produced is very gender neutral. Now that I’m a published children’s author, I can’t help but notice how many books are clearly geared towards boys or girls!

“In the story we tried not to relate to anything about Tom’s home life. This was to maximise the amount of children who can relate to it – they may find that their family situation is very different to Tom’s. My publishers Gomer are very good at pointing these things out – things I’d never have even thought about before setting out on this adventure.

“During the writing process, it was also interesting trying to make every word count. I’ve read a lot of Julia Donaldson over the years and I was always fascinated how she used her words carefully. The fact that she used rhyme to help convey thoughts and ideas also appealed to me and that’s something I used in Boo-a-Bog. I think the rhythm helps children engage with the words more and also provides a sense of movement.” 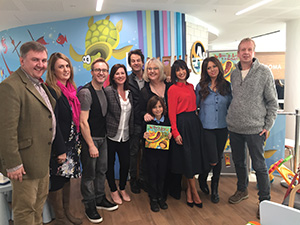 Lucy launched her book at the Children’s Hospital

“A delightful, rhyming story with excellent imagery which I’m really looking forward to reading with my children.”

Even actor Matthew Rhys took to social media to say:

“This is a beautiful song of hope for the Tom in all of us. If only there were Boo-a-Bogs in adult life too. Lucy’s obvious flair and talent for rhyme lets this poem of hope fly.”

For Lucy, it’s when the book makes its mark on its intended readers that really makes her happy.

“We did a reading of the book at the launch at the Children’s Hospital. One of the nurses came over to me afterwards and told me that one of the girl patients had smiled for the first time since she had come into hospital. It’s moments like that that make it all worthwhile.”

So are there any more books in the pipeline?

“I’ve got plenty of stories in my head but I want to do well with this book and see how it goes before committing to any more.

Boo-A-Bog is available from The Welsh Books Council, Amazon and all good book shops.