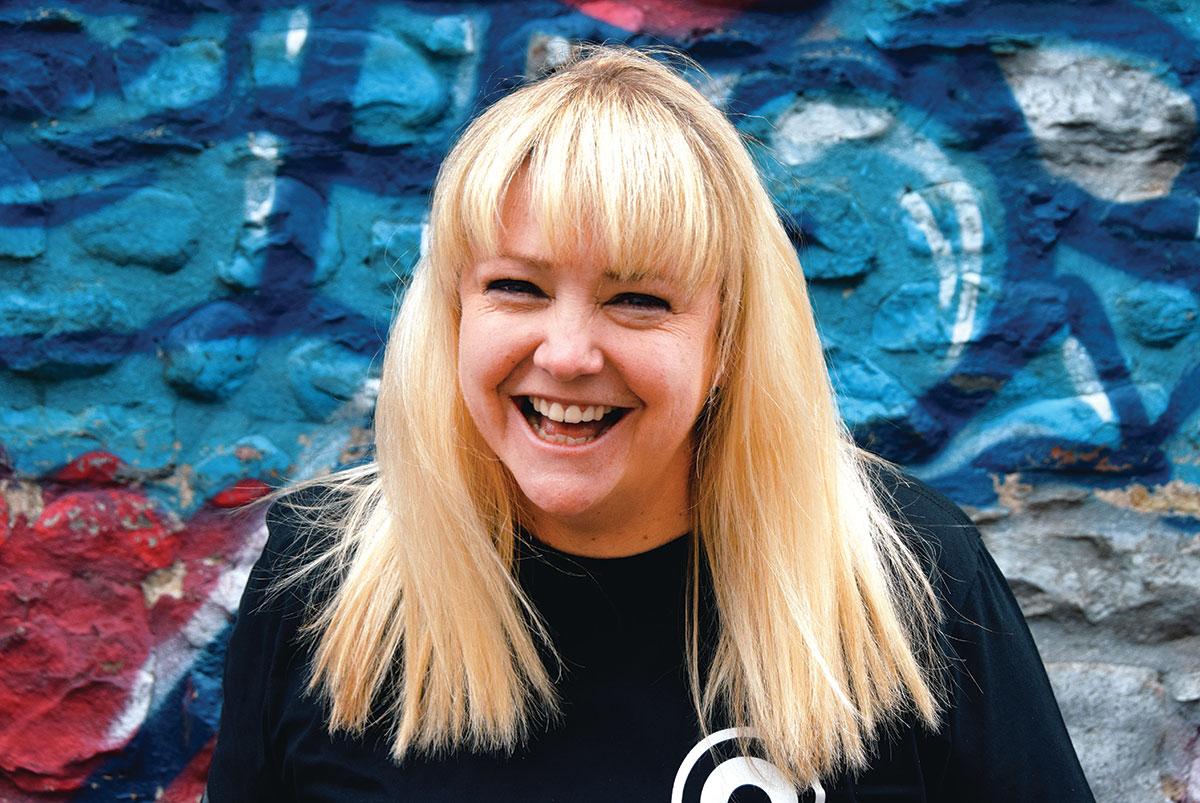 If there’s one person who knows what’s what and who’s who in Welsh music, it’s Bethan Elfyn. She’s just made the move from the BBC’s Llandaff studios to their new city centre building – and she’s loving her new home:

“Look at this!” she says, offering the view from the floor-to-ceiling windows. “You can see all over the city and down to Penarth! Isn’t it great?”

Bethan is excited with her new working home and the possibilities of collaboration and opportunities it can bring. Her reputation for championing new Welsh music goes before her, but it all could have been so very different, had it not been for a trip across the English Channel back in the 1990s.

“I grew up in Newtown in mid-Wales. It was a rural upbringing and it was quite late in life that I fell in love with the music scene.”

During her time in Sixth Form, Bethan had gone to France to work.

“I went there to learn French but I had to do a cleaning job while I was there to pay my way. None of the people there spoke English so it was a really excellent way of learning the language. I had to communicate through sign language for the first few weeks until I was able to start talking about bedsheets in French!” she says.

“While I was there, I met two guys from Belfast and they introduced me to punk music. Whereas my pop compilation from Woolworths in Newtown had been Lenny Kravitz and all the chart hits of the time, I remember hearing this punk music and it transformed everything for me. It was a real revelation.”

The moment would be the start of a love relationship with music that would change her life.

“These two guys were from an urban background on the streets of Belfast and it was such an awakening. I remember coming back to Sixth Form a different person.”

For a girl that had grown up around farmer’s discos and barn dances, her new found passion was to divert Bethan’s life trajectory forever.

“I still wanted to explore academia but my reasons were now different. Suddenly I wanted to experience music and concerts.”

Before she even arrived in Cardiff to start a degree in English Literature, Bethan was writing and blogging for music publications.

“I wrote to Spillers record shop to try and get a Saturday job there and everything about moving to Cardiff was suddenly all about the music scene. It just coincided with everything that was going on with the Welsh music scene too. I remember going to Eisteddfods and seeing early incarnations of people like Gorky’s Zygotic Mynci – I was watching them in Clwb Ifor Bach before any of us were even old enough to be there.”

Bethan’s arrival in Cardiff was perfectly synchronised with what became known as Cool Cymru, the Welsh cultural movement that centred around music, independent film and other artistic endeavours by young Welsh figures prior to, and during the new millennium. The movement was highlighted in 1999 when the BBC announced that year as the ‘Year of Cool Cymru’.

During the 1990s, Wales enjoyed a period of prominence from some of its sports stars like Joe Calzaghe and Ryan Giggs on the world stage. In Wales itself, the construction of the Millennium Stadium and the regeneration of Cardiff Bay added to the country’s reputation. But it was music that perhaps had the greatest impact on Welsh fortunes, with the likes of Super Furry Animals and Catatonia incorporating Welsh language into their repertoire.

For Bethan, it was like arriving at a gold rush.

“Moving to university here when all the bands were doing well was incredible. There was a concert down at Cardiff Bay called the Big Noise Festival, headlined by Paul Weller. The stage was floating on the water and all the big Welsh bands at that time were on the line up. Being in Cardiff around that time, being at the heart of it and going out to all the clubs, my studies probably suffered. But it was so exciting to be part of it.”

Bethan spent her university years interviewing bands, writing for music publications and helping behind the scenes at festivals.

“I recognised that I wanted to go into music journalism and I got a job at Radio Cymru as a general reporter. I had to move up to Bangor for that so I suddenly had to uproot from Cardiff. It was a great time for me though because I learnt my trade producing radio shows tucked away in a small room. I organised loads of sessions and I got to know the music scene up there. I also received a lot of training in news and documentary making.

“I was a day-to-day reporter but also worked as a late-night producer. I was there for two years.”

It was while Bethan was at Bangor in 1999 that she got the gig of her life. Along with Whitchurch’s Huw Stephens, she was chosen to front BBC Radio One’s exclusive new music show for Wales, the Session in Wales, presenting the late-night show on BBC Radio One.

“Huw was in Cardiff then and we’d only met twice at gigs. He was still at school at this point and he was also piloting for Radio One. Up until then, he used to create these mini reports for me at Radio Cymru but then we landed the Radio One job together.”

Broadcasting from the Llandaff studio, Huw and Bethan’s show lasted until 2010.

“The world opened up for us both by working for such a big brand. I travelled the world making documentaries and hosting and DJing at festivals. Huw and I would find ourselves compèring huge festivals like the Reading Festival – and none of this came naturally to us.

“Being Welsh, we were always a little bit shy, especially at the live shows. When we first started, we suddenly found ourselves in front of 20,000 heavy metal fans. You can imagine the things that were going through our heads. There was one occasion when I was introducing the Reading Festival headliner – while facing the crazy crowd, someone came on stage and tried to wrestle the microphone from me. I was still mid-sentence when I realised it was the headliner, eager to start – It was Ian Brown!

“We hosted the very first Radio One Big Weekend in Swansea. There were 60,000 people there. Being new to it all, we did that thing where you think the microphone is never going to be loud enough and we shouted a lot! It was surreal walking around the portacabins backstage and working with people like Beyoncé and Will Young and I kept asking myself the question ‘Erm. And I’m here because?…”

Despite her contemporaries including the likes of Sarah Cox, Zoe Ball, Jamie Theakston and Chris Moyles, Bethan was never fully convinced that she was there on merit.

“I look back at the photos of some of the Christmas parties we had and I still wonder how I ended up there. I think they call it Imposter Syndrome. There was one time I was at Buckingham Palace talking to Tony Blair who was the Prime Minister at the time and wondering how a girl from mid-Wales had ended up here. Thankfully there were a few Celts from other nations working in similar roles to me at the station and that helped.”

“As Welsh people, most of us are not born into privilege. We’re often told to get a job and get on with life. In the past, our role models have been mainly sportspeople. And when you have a country that’s so small, you become a lot fiercer on identity.

“I think there’s more going on in the Cardiff music scene now than there was 20 years ago though. We don’t see it as much now but it’s more prolific than it was back then. That can only be a good thing.”

Bethan still hosts her own show on BBC Radio Wales while juggling a producer and project manager role in production, both in radio and outside the studio.

“For the last five years, I’ve been running the music project Horizons, which is a joint initiative between BBC Cymru Wales and the Arts Council for Wales to promote new Welsh music. We mentor artists and arrange festivals.

“I’ve also recently been nominated to the Cardiff Music Board, which is the new Council strategy to instigate more musical discussion around the city. It’s all very exciting.”

The move from the Llandaff studios to the city centre has also given Bethan a fresh outlook on her work.

“It’s an incredible new lease of life to be working in the centre of town. Saying that, I did enjoy Llandaff – it’s a beautiful village. I’d sometimes head into the High Street and the parks around the area are so lovely.”

But Bethan is keen to look at the positive side of the move:

“Some have found it hard to leave Llandaff; there’s a lot of history in those corridors and studios and a lot of fond memories. But I’m not nostalgic about moving because it’s about the work you do and the people you represent.”

With BBC Wales starting its new chapter in the city centre, Bethan’s future is still up for grabs.

“For the last few years, I’ve been bringing up two little ones and any level of ambition has been put on hold while I deal with kids’ parties and gymnastics. If I didn’t have kids, I’d probably have said that my next step would be to travel the world or write a book or something. But having two kids, my main ambition in life is now to get to Friday,” she laughs.

“I have achieved some memorable things in the last 20 years though. From making documentaries around the world to meeting musical heroes and household radio names, it’s been an incredible era. Perhaps the one memory that stands out was a DJ set I did in a deserted skiing resort in Australia. And yes, you heard that correctly – in Australia – on Mount Buller. Nick Cave had curated a festival and he’d just finished his set. A friend and I were DJing in the village square and we saw a crowd of people coming down the mountain after watching Nick Cave’s show and flooding the old skiing square where we were playing. We had a tiny little stage and everyone simply came to us and danced all night under the stars. Magical!

“It was one of those moments where once again, I asked myself the question ‘What am I doing here?'”

Bethan’s aim has always been to support new Welsh music, broadcasting it side by side with the latest exciting new bands and producers from around the world. Breathing life into the Welsh music industry is something that Bethan continues to do to this very day. So when Wales’s next artists make their mark on the world, be sure that Bethan has had a hand in their rise to fame somewhere along the line.