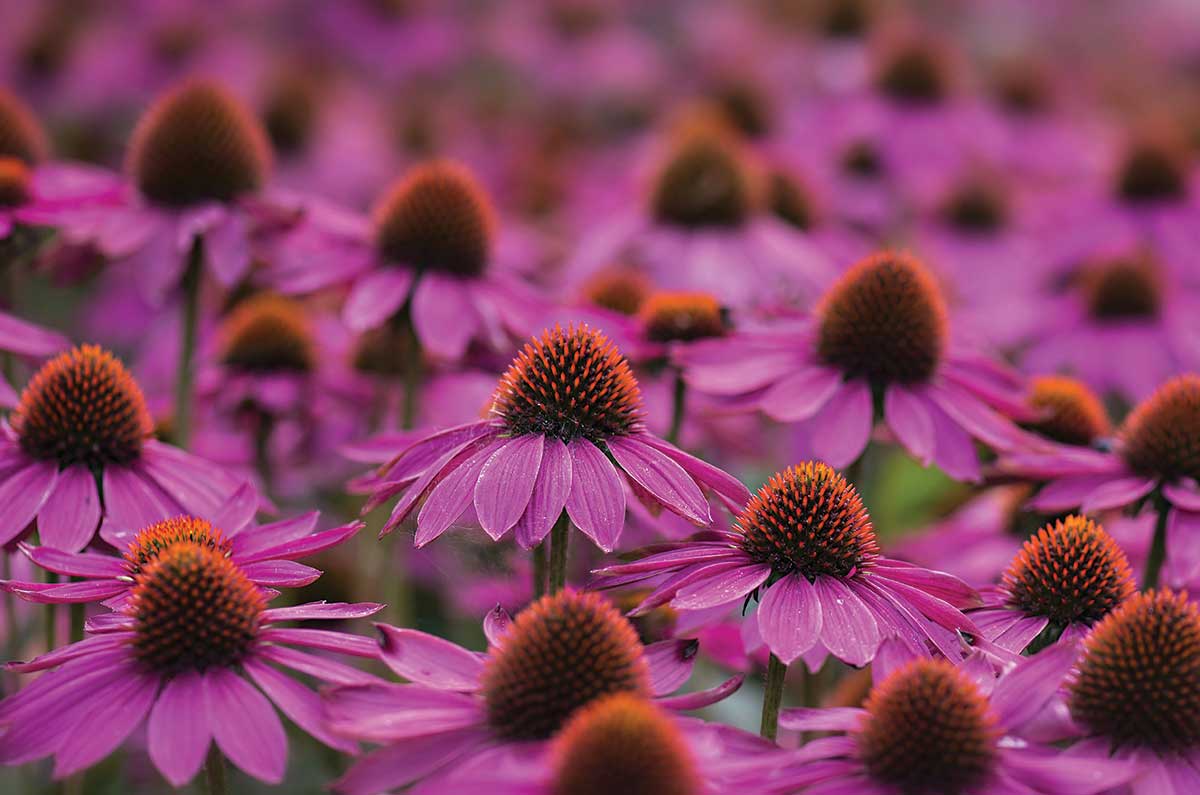 In his final installment on perennials, Kevin Revell shows how we can maintain a garden of colour before the first frosts of winter arrive

As summer draws to a close, many of the mainstays of the mid-summer border are still going strong, providing that conditions are to their liking.

Typical prairie flowers such as Helenium and Echinacea will still be looking good, but are now joined by other members of the daisy family or Asteraceae, along with the ornamental grasses with which they look most at home. That the most popular partner, Miscanthus sinensis or Chinese silver grass, originates on the other side of the world is surprising.

The most noticeable flowers now are the golden yellow stars floating above the sandpaper-textured foliage of Rudbeckia fulgida ‘Goldsturm’, which is by far the strongest-growing and most popular variety, reaching a metre high. The swept back golden petals surround a domed chocolate brown central boss and they last for absolutely ages. They will eventually need dead-heading however, to continue the display long into autumn. If left, the faded seed heads give shape to the winter garden and look good after a sharp frost to accentuate their structure.

The variety ‘Deamii’ is less coarse and less robust and differs in having a flat button of a central boss. More useful and increasingly popular is the smaller form of ‘Little Gold Star’ which barely reaches 30cm tall but also produces a mass of gold floral stars over a long period. It makes a very good choice for the front of the border, or for pots and containers. In recent years, many new hybrid Rudbeckias have been released with yellow, orange and brown colouration to the petals, often all within the same flower. These new forms are not reliably hardy however and will not come back in subsequent years so are best treated as late summer annual bedding plants.

Japanese Anemones or Anemone japonica are popular cottage garden plants, being virtually indestructible and long-lived, if a little invasive, once established. They have long been divided and passed around by neighbouring gardeners so distinct local populations will form along blocks of streets. Tolerant of dry shade, they are a useful plant to have in the garden. They sit minding their own business for most of the year until wiry stems bearing clusters of pretty pink or white daisy flowers rise up in late summer and autumn. Some of the older varieties such as ‘Hadspen Abundance’ will reach up to 1.5m tall but most named varieties are usually a little shorter and make fine subjects for the back of a border.

They are sufficiently tough not to need any support so can be left pretty much to themselves apart from being cut down in winter or ideally in early spring before growth recommences. The most popular forms are the single white flowering ‘Honorine Jobert’ and semi-double ‘Whirlwind’, whose ghostly blooms loom out of dark corners at dusk. The single deep pink variety ‘Splendens’ is another winner along with the double form ‘Queen Charlotte’. Although great in borders, these plants do not lend themselves to container gardening. As with many other varieties of plants, there has been a drive towards miniaturisation over the past few years to cater for today’s smaller gardens and a tendency to grow plants in pots for maximum effect over a short period. The imaginatively named Fantasy Series that include ‘Cinderella’, ‘Pocahontas’ and ‘Red Riding Hood‘ come in a similar range of single and semi-double pink forms but only grow to about 45cm tall.

It would be remiss of me to discuss the daisy family without covering those which give the family its name. Asters or Michaelmas daisies, as their common name suggest, is a late flowering perennial which are surely the last flowers of the year. They are eagerly sought out by the last butterflies of the year as they take on stores prior to migration or hibernation. They really do come in all shapes and sizes from the towering Novi-Angliae or New England asters which can reach almost two metres tall. They are more at home at the back of large borders typically found in parks and stately homes. Much of the breeding of these plants took place in Germany which may explain the less than memorable names such as ‘Alma Potschke.’

The formerly popular Island Series, named after South Sea islands such as ‘Samoa’ and ‘Bahamas’ are shorter at 30cm and colourful but are disease prone and have now been superseded by new Aster dumosus forms which are disease-free and wonderfully compact and floriferous. ‘Crystal Rose’ and ‘Sapphire’ are fine examples. Another superior form is Aster frikartii ‘Monch’ which is late flowering with beautiful lavender-blue flowers, compact at 45cm and deserves to be more widely grown, being completely trouble-free giving a final injection of colour to the autumn border. Sadly, many of the Novae-Belgii or New Belgian asters fall prey to mildew late in the season just as the flowers come out but this is less of a problem when grown in borders rather than in pots and containers. It can spoil the appearance of the foliage however and shortens the display that would otherwise run until the first frosts.

Old favourites such as ‘Ada Ballard’ and ‘Marie Ballard’ are still widely grown but may require staking in exposed positions growing to 60 to 80cm or so.

Liriope muscari, a rather unusual flower, is perhaps the last to flower in the autumn and looks more like a grass for most of the year. In September and October, blue flowers which resemble the spring bulb, grape hyacinth, appear partially hidden by the foliage. The common name of lily turf does nothing to improve its popularity, but it is an extremely tough plant, surviving in dry shade and only coming into its own late in the year. The variety ‘Big Blue’ is worth seeking out.

With that, the season for flowering herbaceous perennials comes to an end. A few flowers may be seen in October and November on hellebores, but these are more plants of winter and early spring but are a welcome sight, nonetheless.