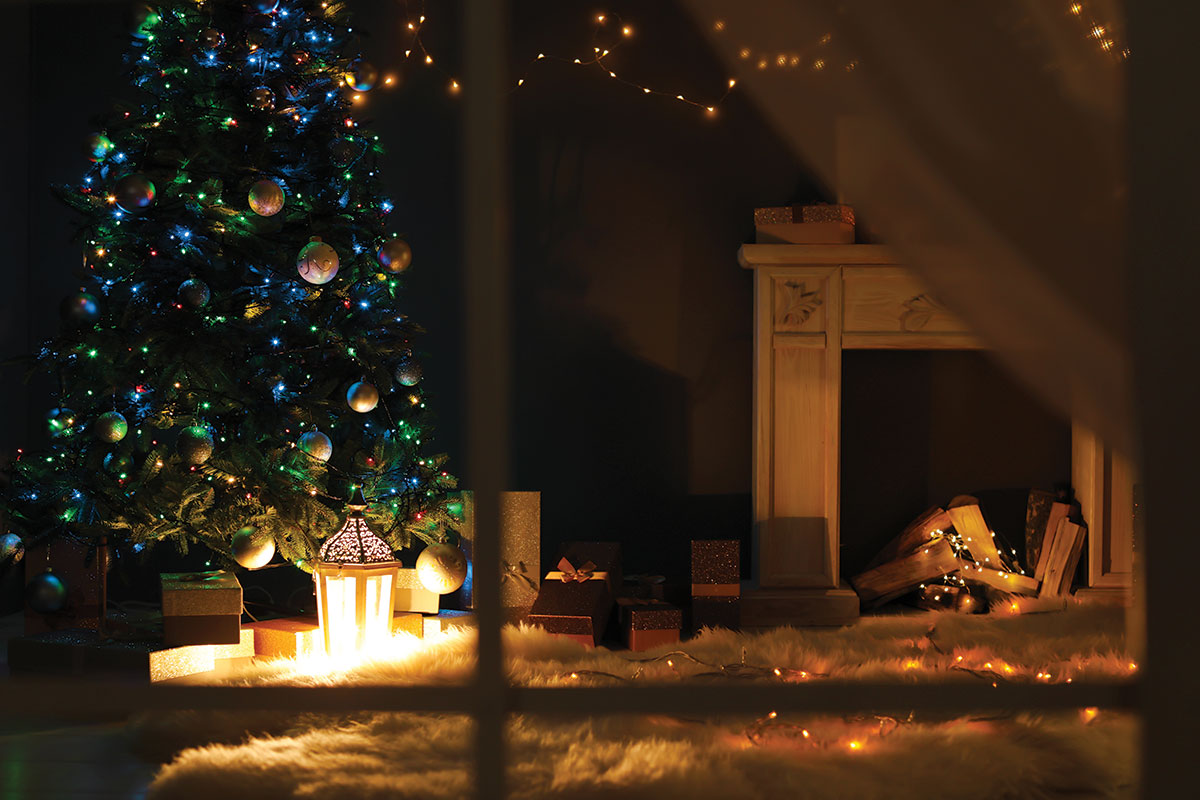 Mary Willmott buttoned up her coat and stepped out into the freezing dusk.

“Oo, it’s a cold one tonight,” said Maggie, walking alongside Mary. Maggie pulled her coat tight around her neck and linked arms with Mary to keep warm.

The pair had just finished another long shift at the Heath Hospital’s Intensive Care ward. It had been a punishing month, just like the month before, and the month before that.

They made their way briskly to the car park, steam rising above their heads from their faces. The sun was fading quickly and the cold night air was seeping into all the nooks and crannies of the hospital grounds.

“It doesn’t feel like Christmas Eve does it?” said Mary.

“No. It’s been a funny old day,” replied Maggie.

A few minutes later, in the gathering gloom, Mary’s car made its way past the fuzzy red lights of the hospital’s chimney. The car headed out, away from the blurred glare of the hospital lights and out into the foggy, frozen suburbs.

“I need this coming fortnight off so much,” said Mary, lifting her hand to the air vents to see if the heaters had warmed up.

“I bet,” replied Maggie. “It’ll be hard on your own, especially as this will be your first Christmas without Jack.”

“Yeah. I know,” mumbled Mary quietly. Although the thought of her first Christmas without her late husband had frightened her, she had decided to do the best that she could.

“Jack always got everything ready for Christmas,” mused Mary. “I haven’t even got a tree this year! Might be a bit too late. I’ll be ok. It’ll just me and Milly. Don’t know what I’d do without that cat.”

A short while later, the car turned into Maggie’s street and pulled up outside her house.

Mary peered out into the mist.

“Your house looks so lovely,” she said.

“Are you sure you’re going to be ok?” asked Maggie. “I’m worried about you.”

“I’ll be fine. I’m going to pop into the village now and see if I can get some bits and bobs before the shops close. Are you all set?”

“I am. I do need to quickly pop out to drop some things to a friend. Then I’m home and on the Baileys.”

“Ah! The Baileys! I need to get some of that too! Have a lovely Christmas Maggie,” said Mary, and leaned over to give Maggie a big hug. They clung tight together for a few seconds. It was the first hug that Mary had had in months. Then Maggie stepped out of the car and made her way up the garden path to her front door.

Mary was so tired that she considered heading directly home and going straight to bed. But she knew that none of the shops would be open in the morning. Just half an hour more and she’d be home, she told herself.

After a short drive, Mary parked her car in the village where the glow of the shop lights gave her hope.

First, she had to head to John the Butchers. John had been a family friend for years and after hearing the sad news about Jack, he’d told Mary that he’d keep a turkey back for her this year.

She dashed over the road and into the butcher’s where an older gentleman was mopping the floor. There was an overwhelming smell of disinfectant.

The man looked up, a little startled. “No love. He’s out on a delivery.”

Mary looked at the counter.

It was completely empty and a younger man was leaning over, reaching inside to wipe it down with a cloth.

“Looks like you’re all out of turkeys,” said Mary.

“We’re all out of everything, I’m sorry love. Did you pre-order?”

“I’m sorry lovely,” said the man. “We’ve literally got nothing left to sell to you.”

The shop was empty, apart from a woman who was stacking empty boxes. Mary scanned the shop. Most of the shelves were bare. She looked closer at the carrots.

“These veggies look a bit sorry for themselves,” she said.

The woman turned to face Mary.

“We’ve been flat out all day. That’s all we’ve got left I’m afraid.”

Mary sighed before picking up an empty basket and tossing a few limp vegetables in.

She didn’t have a turkey but at least she had a few vegetables. She’d get by, like she said she would.

After she had left, she was about to make for the car when she suddenly realised that she still didn’t have a tree.

“Oh God. The tree!” she yelled. Panicked, she hopped around the corner to the small garden shop but was suddenly faced with the large wooden gates, locked together with a heavy padlock. She rattled the cold gates.

There was silence, followed by a voice behind her.

“No. Terry locked up and left about half hour ago.”

Mary spun around to see Julie, the shop assistant there.

“So no tree either?”

By now, it was clear that she had left everything too late. She’d make do. It was never going to be a real Christmas without Jack anyway but it would have been nice to at least have a few comforts.

This time next year, she said to herself, she’ll get organised and do it properly.

To cheer herself up, she decided to get a bottle of Baileys from the off-licence and drown her sorrows in front of the TV.

“The Baileys sold out yesterday,” muttered the shop worker. “Someone came in and bought the last ten bottles we had.”

Mary’s face fell. She paid for a bottle of red wine and headed back to her car.

She made her way home through the slow, smoky streets and finally turned into her cul-de-sac. Home at last.

Outside her house was a group of what looked like carol singers. The last thing she needed!

Yet as she got closer, she spotted Maggie in the group, waving frantically.

Mary parked up, got out into the cold evening air and locked her car.

“What are you doing here?” asked Mary.

“We’re here to give you something back.”

“Hi Mary,” came a voice from the dark. Mary peered at the man. It was John, the butcher. In his hands, he was carrying a large box, adorned with tinsel. And inside, underneath the packaging, was a large turkey.

“Glad you’re here. We were getting cold! This is for you,” he said. Mary’s heart wanted to burst.

She looked around. There was Jan, who she recognised from the greengrocers. She too was carrying a box, this one full of fresh vegetables.

“We kept you back some of our nicer vegetables as we know they all go on Christmas Eve.”

Maggie was so excited.

“I got you some bottles of Baileys too,” added Maggie. “We had the last ones in the off-licence. There are five bottles in there,” said Maggie. “I got five for myself too! They should see us through until we’re back on shift together.”

Mary graciously took the box with a smile, her eyes filling with emotion.

“Thank you so much.”

“There’s a box there with chocolates and even a bag of Christmas treats for Milly. It’s the least we could do,” added Maggie.

Just then came the roar of an engine and up the road came a van that screeched to a halt alongside the group.

The door flung open and out stepped Terry.

“Ho, ho, ho! Merry Christmas everyone!” he bellowed. He disappeared around the back of the van and flung open the doors. Then, with one swift movement, he lifted out a small fir Christmas tree and brought it to Mary.
“Merry Christmas, Mary!” he said beaming. “I kept this one back for you. I think it should fit your window perfectly. Not too big.”

Mary was overwhelmed. A turkey. Vegetables. Drink. And now a tree. Even Milly had something.

“You always put yourself last so this year, we’re putting you first,” said Maggie.

“Especially after you looked after my mum when she was in hospital in the Spring,” said John. “We’ll never forget that. Thank you.”

“Well so is this,” said Maggie.

“It was Maggie’s idea though,” added Jan.

“I’d love to invite you all in to help me but I’m not sure that’s allowed,” said Mary. “Mark Drakeford will be down here to tell us off.”

“You’d best get in,” said John. “It’s cold out here. We’ll quickly pop the stuff in the house. Then I suggest you get in the warm and lock yourself away from the world,” he added.

“Oh wait! I nearly forgot,” said Maggie. “We’ve got you something else!” She went to her car and took out a large fur blanket.

“We’ve bought you one of these too,” holding out the blanket. “It’s not real fur. No animals were harmed in the making of this blanket. And it’s electric too. You’ll love it.”

Several hours later, as the frosty night settled on the village, Mary sat snuggled under her blanket. Milly was cwtched up too, fast asleep, her belly full of treats. A half glass of Baileys sat nestled among the empty chocolate wrappers on the coffee table in front of them.

Mary’s tree sat glowing silently in the corner of the room. And on the TV, George Bailey was wishing everyone in the street a happy Christmas. Both Mary and Milly were warm, content, and happy.

In her duty as a nurse, Mary had done what she could for the year. Every day, she had given her everything, and ultimately lost the one closest to her as a result. There were more battles ahead, but for now, just for one night, she was hushed and soothed.

And outside, beneath the bitter Winter frost, Spring was stirring.