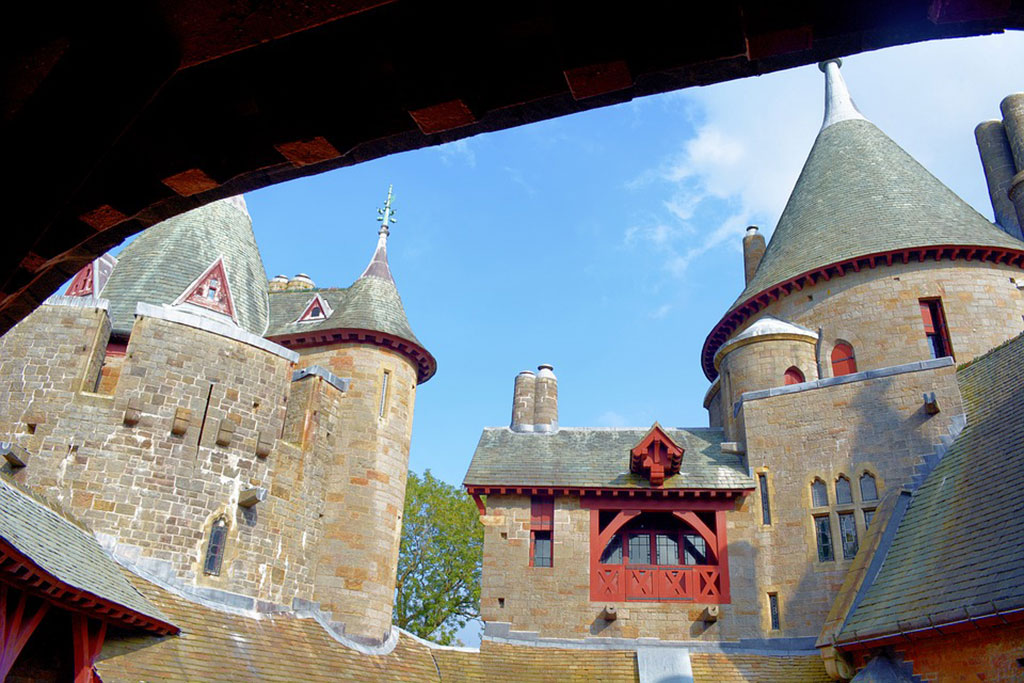 Castell Coch (the Red Castle) sits proudly on the side of a hill overlooking North Cardiff and the valley that carries the River Taff.

Its fairytale appearance belies the history that the building contains in its stones. There has been a fortress on the site since the end of the 11th century when an earth and timber motte castle was built there by Norman lords to defend their land. Both Ifor Bach and Gruffud ap Rhys are two Welsh rulers of Senghennydd whose names are linked to the castle.

During the 13th century, the de Clare family, the Norman lords of Glamorgan made great gains against the Welsh in the upland regions of their disputed territory. It was during this time that it is thought the castle was reconstructed into a stone one, with a small oval courtyard with three circular towers. It was probably Gilbert de Clare (the builder of Caerphilly Castle) who added the towers in the 1280s. It is the spur buttresses at the base of the round towers that suggest it was of Norman design, but it seems that the castle was abandoned in 1316 after Llewellyn Bren led an army against the de Clares in 1316. It was never repaired and the castle fell into ruin.

By 1871, like many other castles in Wales, the castle was an overgrown ruin. Crucially however, it happened to be owned by John Crichton-Stuart, the 3rd Marquess of Bute – one of the richest men in the world. The Marquess was a landed aristocrat and an industrial magnate, owing a lot of this wealth from his father who had risked a long-term strategy in building Cardiff into one of the busiest coal-exporting ports in the world. Lord Bute had a great interest in religion, medievalism, the occult, and architecture. He had already enlisted the services of William Burges to remodel Cardiff Castle in his own unique style of gothic fantasy.

In 1872, Bute began his project of Castle Coch by asking Burges to look into the possibility of restoring the castle. Burges produced the report and work began in 1875. The castle was to be transformed into a summer home for the Marquess. The restoration was a complete one, but Burges was not to see the finished article. He died in 1881, ten years before completion of the work. His detailed drawings of the interiors allowed his team of craftsmen to complete the task without him. It took sixteen years for the castle to be transformed into the building we know and recognise today.

The castle may have an authentic medieval look to the exterior but the interiors are Victorian fantasy, richly decorated and highly imaginative. After a visit to Castell Coch, it is worth visiting nearby Cardiff Castle to see the ultimate example of the collaboration between Lord Bute and William Burges. At the time of completion, the castle represented a medieval structure, but it did have all the modern conveniences of its time – flushing toilets, central heating and a working kitchen made it habitable. Burges also left behind some justifications for his use of the conical towers, which some historians question for authenticity. Burges wanted them simply for visual effect. 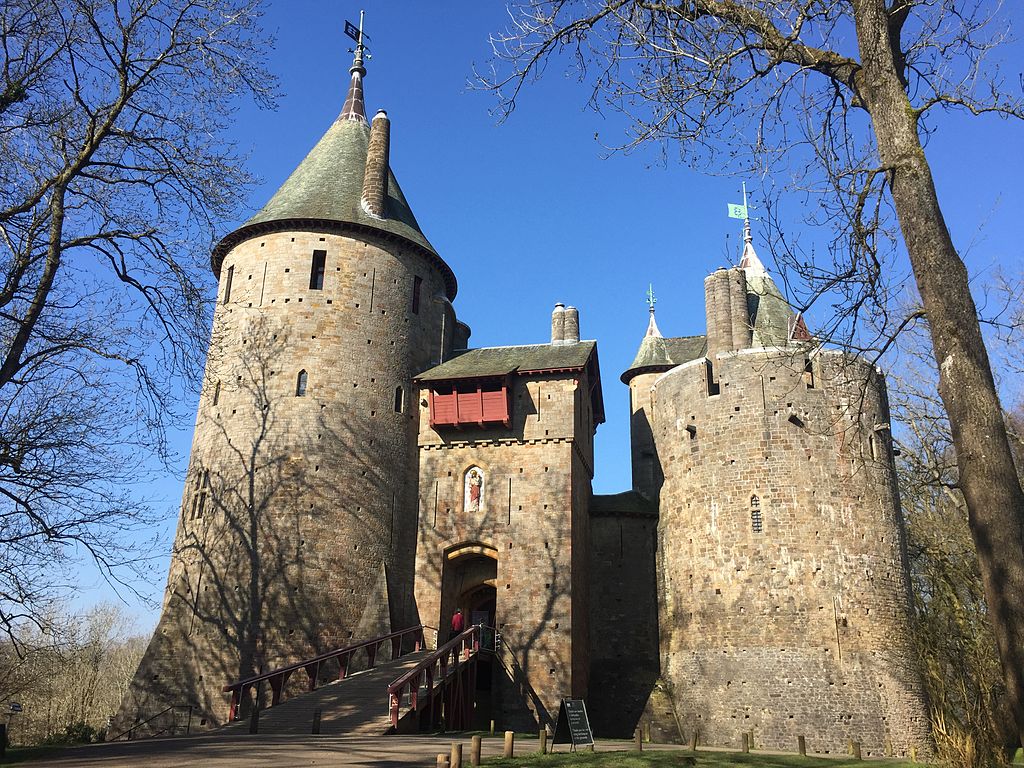 The Keep Tower, the Well Tower and the Kitchen Tower incorporate a series of apartments; of which the main sequence, the Castellan’s Rooms, lie within the Keep. The Hall, the Drawing Room, Lord Bute’s Bedroom and Lady Bute’s bedroom comprise a suite of rooms that exemplify the High Victorian Gothic style in 19th century Britain. However some of the poorer interior decorations can be attributed to work carried out after Burges’ early death in 1881. Some of the painted decoration is based on patterns found in Welsh castles. The Drawing Room and Lady Bute’s bedroom have ceilings and wall paintings that are almost equal to the best achieved at Cardiff Castle.

The decoration and even the smallest details – such as the door handles and the window latches were carefully considered. Even some of the walls feature paintings of various animals, including birds, monkeys and squirrels, as well as mythological beings.

The uppermost story of the Keep Tower holds Lady Bute’s Bedroom, painted in brilliant colours with gilt and mirrors lighting up the double-domed chamber. Apart from the large bed, the furniture in Lady Bute’s Room is simplistic and uncomfortable – a result of Burges determination to keep true to the medieval character of the castle.

In 1950, the 5th Marquess of Bute placed the Castle in the care of the Ministry of Works. It is now administered by CADW on behalf of the National Assembly for Wales.

Castell Coch has made numerous appearances in TV and film productions. Drivers can also spot the magical- looking castle from the M4 as they pass the Coryton Interchange.