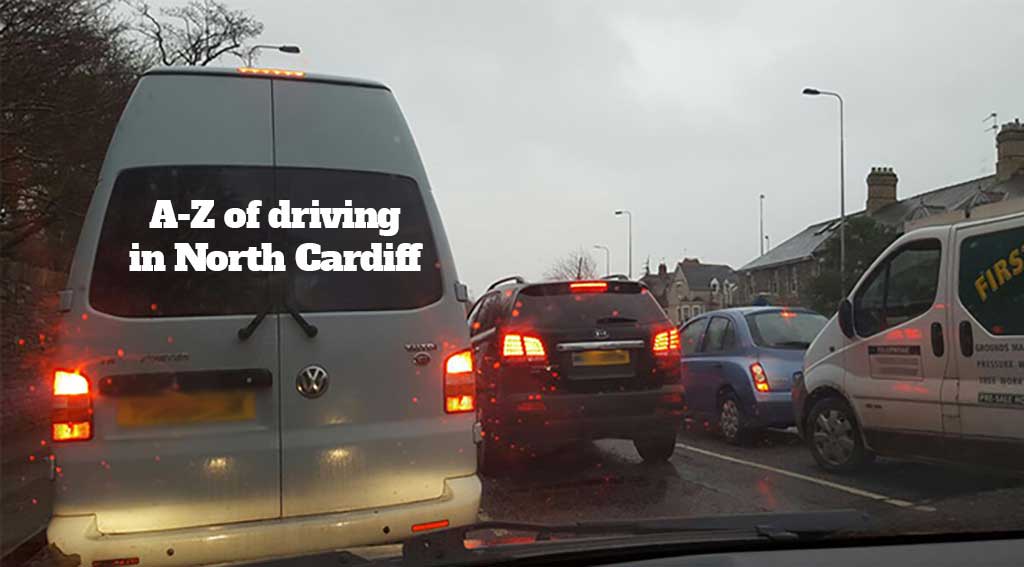 Driving around North Cardiff can be a frustrating experience. Here’s a humorous and not-so-entirely factual guide on what to expect if you take to the roads around our villages

At 186 miles long, the Cardiff to Glan Conwy Trunk Road as it’s also known, connects Cardiff on the south coast to Llandudno on the north coast. It also connects motorists spiritually just outside Nantgarw, where grown men have been heard to sob collectively at the slow-moving traffic.

Once a wondrous and breath-taking arboretum, Caerphilly Road has now been designated as an Area of Special Interest for Bus Lanes.

Possibly the largest roundabout in the world. Visible from space, it stretches for 34 miles and can hold up to a billion cars at anyone one moment.

When the estate was first built back in the 1980s, cars hadn’t been invented and people used to travel around the estate on horse and carts. Danescourt Way, the main road that loops around the estate is even older and was first laid out by the Romans. You can still make out some of the ancient city walls too – you can find them in the middle of Danescourt Way and if you’re travelling at more than 30mph in your car, you’ll know all about them as you pass over them.

These are the cars you won’t hear as they approach. You’ll also find that they are lighter than fuel-powered cars. Unless you get hit by one obviously.

If you’ve ever been hit with some kind of motoring fine, it’s highly likely that you’ll feel wronged in some way. Hurt even. But the annoying thing is – they’re right. You’ve been VERY naughty.

Commonly known as the Wacky Races. This roundabout is the hotbed of drag racing superstars, each seeking to go from 0-30mph in the quickest time possible to avoid the car that comes bombing out of nowhere at the last minute.

Gone are the days when you can turn into Llandaff High Street and drive to the car park at the top in an easy and fairly relaxed manner. These days, you need to run the gauntlet of cars and goods vehicles parked on yellow lines, doddery and dithery older folk attempting to cross the road – and the deluge of traffic coming down the road in what has now become a single file road. The benches look nice though.

As we found out last March, driving on ice can be a tricky thing to master. Remember – always steer into the skid. Or is it the other way round? Only one way to find out!

An American term, describing the act of crossing or walking in the street or road unlawfully or without regard for approaching traffic. Schoolchildren are adept at this, especially along Merthyr Road between 3.30pm and 4pm on weekdays.

Karma is when a motorist steals a parking space that isn’t theirs, only to find themselves blocked in when they return to their vehicle.

This scenic viewpoint allows motorists to pull up in rush hour and savour the views of the posh houses and the BBC. Spending an hour or so here in the mornings is good for the soul because it allows you to catch up on the things that you’d not normally have time to do – like read War and Peace or grow a beard.

Whitchurch’s jewel in the crown. Just don’t get stuck behind a bus when there’s a long queue of people waiting to get on it.

Motorists often have names for other motorists who are driving around north Cardiff. Unfortunately, this is a family magazine and we can’t reproduce any of those names here. Sorry.

They may look like giant craters but these holes are actually obstacles placed there by local council officials overnight to keep drivers alert. Apparently. They are usually filled in with Rice Krispies by the Highways Department when complaint levels reach a certain level. Also apparently.

Also referred to as road rage. Often occurs when a motorist, clearly in a rush, pulls out on you at the last minute. They then proceed at no more than 15mph.

There’s a little roundabout near the Heathcock in Llandaff, and it holds back floods of traffic from three different directions. Motorists like to play a simple but devilishly exciting game here – motorists will arrive at the roundabout from three different directions all at once and stop. Then they all sit there and look at each other for about ten minutes, wondering who is going to go first. The tension is almost unbearable!

Back in the day of Tomorrow’s World, we used to marvel at the fact that one day, we’d be watching more than four channels on TV. If Tomorrow’s World was on TV today, they’d be talking about self-driving cars, some of which will be programmed to drive like lunatics, just to keep the tradition of human-based driving alive. And it’ll be here before we know it.

At several points during the working day, it’s the biggest car park in north Cardiff. Want to turn into the Tesco garage? Ha! No way! I’m going to park right over the entrance so that NO-ONE can get in while I wait for the lights to change.

This manoeuvre can often be seen by daring motorists at traffic lights on North Road.

You can distinguish these cars from any other car by the fact that they’ve always got their headlights on. Always. Swedish government statistics on road traffic accidents showed that cars with lights on were involved in accidents significantly less often. So the Swedish government made it law that cars had to have their lights on all the time. And guess where Volvos are made.

Ah Western Avenue, so-called because it’s the main thoroughfare of Western civilisation. It was once the only link between the Western world and the Far East. Now used by people wanting to get to Tesco for a ready meal.

Also referred to as High Intensity Discharge (or HID) headlights, they offer a crisp, whitish-blue light that illuminates the road far ahead. They can also temporarily blind any other motorist heading in the opposite direction at a distance of two miles.

Yes, car yoga is a real thing. Perhaps one of the most popular positions is The Slug, where the motorist sits motionless for up to half an hour at a time. See also Llantrisant Road.

Usually found located a few metres away from a busy roundabout, causing no end of chaos on the said roundabout when someone decides to step out onto the said zebra crossing.