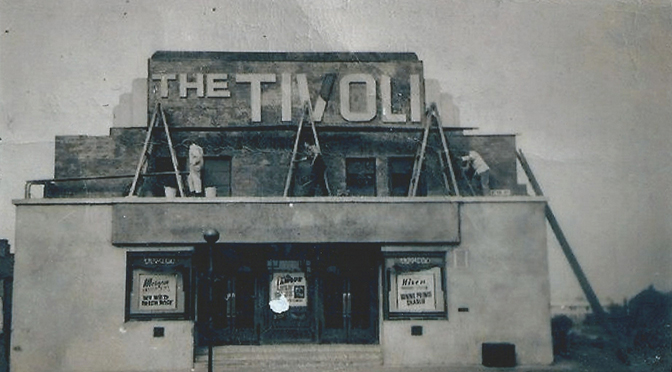 Llandaff North residents made history this year when they watched a film in the Tivoli Cinema – 55 years after it closed.

The site of James & Jenkins Garage – the old Tivoli, became a car showroom in 1961 and was once Continental Cars – Wales’ first and only Mercedes Benz dealership.

This year, as part of the Llandaff North Festival, local residents converted the showroom back to its original use and screened The Night We Dropped a Clanger – the last film shown at the Tivoli before it closed in 1959.

“When we learned that the garage was the original site of the cinema, we researched it online and found that the last film shown there was a wartime comedy starring some great British talents – Brian Rix, Leslie Phillips, Hattie Jacques, Liz Fraser, and a young Andrew Sachs. It seemed the natural choice for our pop-up cinema and proved very popular.”

When organisers approached Mark James, of James & Jenkins, he immediately offered to move the cars out of the showroom – the old cinema hall – so people could enjoy the film in its original venue. Mark said:

“The building itself looks very different now, of course, but if you look carefully, you can still see one or two of the cinema’s features. When we took over the building, the old projection room was upstairs with the screen at the far end of what is now our large showroom. I’m pleased we could be part of the festival in such a significant way.

“We have some photographs and plans of the original cinema and many people who came along told us their memories of the Tivoli.”

There was also a family matinee show of Paddington on the Sunday afternoon of the festival. Both films were very well attended and the Tivoli Cinema has since screened films in a local school and a café.

Renown Pictures, the company that owns the rights to The Night We Dropped a Clanger were also delighted to help with a DVD copy of the film. They recently launched Talking Pictures TV, a satellite channel dedicated to showing classic British films.

The Tivoli Cinema also won a commendation at the Cinema for All 2015 Awards in a very strong category of ‘Best Single Event’. Not a bad feat at all considering that the project is still in its first year.

“We want to see families from Llandaff North, as well as film fans from further afield, come along to support our pop-up cinema,” says Lewys. “We are supported by Film Hub Wales and Cinema For All but we would love to get more support from the local community. We hope that our work so far will mean regular film screenings throughout the year for children and adults, as part of a Llandaff North Cinema Club.

“We have a kids’ matinee of Cinderella and an evening screening of Trash on the 12th December.”

The latest screenings are featured on the group’s Facebook page. Search for Llandaff North Tivoli Pop Up Cinema.