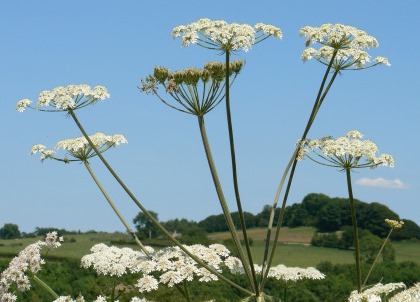 A warning has been issued to people of North Cardiff after a toxic plant was discovered in Whitchurch.

The hogweed plant, which causes extreme blistering and scars, was found in Whitchurch Brook. Parents have been urged to keep vigilant about the weed, which has caused burns and blisters to other children across the UK in the past few weeks.

The plant is very common across Cardiff and is likely be found on rough ground and alongside rivers all over the city. The plants contain phytotoxins that cause blistering of skin so should be treated with caution. The hogweed discovered in Cardiff is not the same as giant hogweed, which contains toxic sap but it is possible that the giant hogweed can be present in other parts of Cardiff.

Hogweed can be distinguished by a reddish-purple stem with dark red spots which can vary from 3-8cm thick, and fine spines and its spotted leaf stalks.

Its origins lay in the Caucasus mountains, on the border between Europe and Asia. It was introduced into Britain by Victorian plant collectors, but has now spread throughout the country.
Anyone who comes into contact with the weed is advised to wash the affected area immediately with soap and water and contact a pharmacist or doctor if they feel unwell or have a severe reaction.