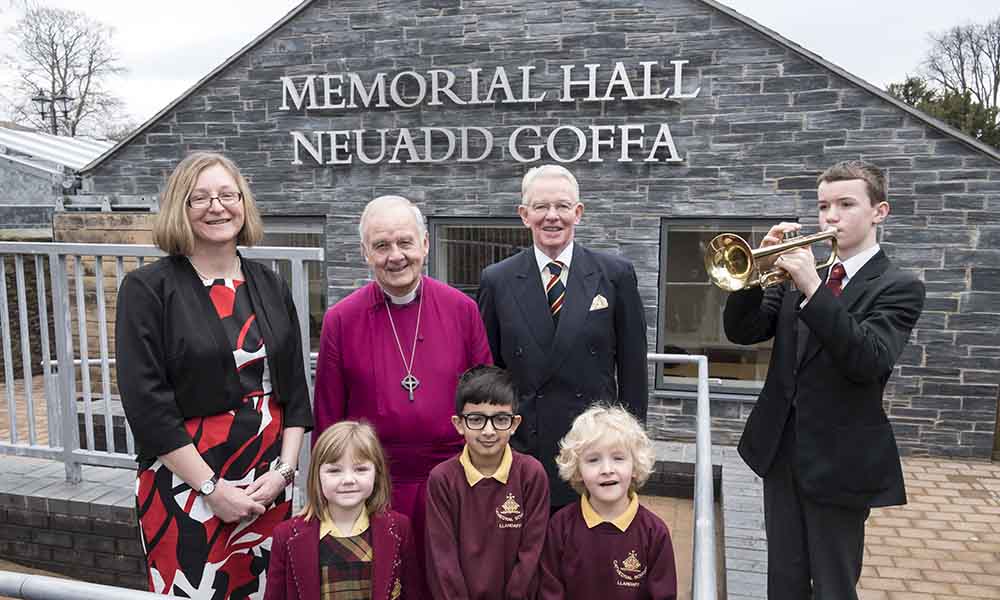 The new Llandaff Memorial Hall has officially re-opened this week following a £2.2m investment by the Cathedral School.

The original building has been replaced with a multipurpose hall which will be used by the School’s Primary phase as a dining space, gymnasium and performance/assembly hall.  Outside of school hours, the Hall will be available to the local community as a venue for clubs and meetings, special events, such as wedding receptions and birthday celebrations and for local dance/theatre groups, on a not for profit basis.

The Most Revd Dr Barry Morgan, Archbishop of Wales and former Governor of the School, officially opened the building and was joined by governors, contractors, staff, pupils and representatives of the Llandaff community.

Opened originally in 1957, the Memorial Hall was established as a community facility to commemorate those from Llandaff who served and fell in World War II, amongst whom were 23 casualties who were former Cathedral School pupils.

“The Memorial Hall is a wonderful resource for the School and we are delighted to have restored it to its original purpose.  The former Memorial Hall was erected for the benefit of the community, of which the Cathedral School is very much a part. Keeping its name was very important for us as a school.

“We were honoured to be joined by the Archbishop of Wales at the launch event and wish him all the very best for his forthcoming retirement.”

While blessing the new building, The Most Revd Dr Barry Morgan, Archbishop of Wales thanked those involved in bringing the project to fruition and asked guests to remember those in whose memory the hall was originally built.

“May the rebuilding of this Memorial Hall, an educational and community resource in the heart of Llandaff, enhance the opportunities for fellowship between the Cathedral School and the wider community.”

“The Memorial Hall completes an extensive development programme by the School in recent years including the renovation and extension of The Lodge, the introduction of sixth form teaching and the Sixth Form Centre, Sports Pavilion and Woodard Building, a classroom provision for the School’s Senior pupils.”

The capacity in the main hall will be 150 seats, theatre style.  Bookings for the facility will be managed by the Cathedral School Finance Office on 029 2056 3179.

2021: The Masterplan
Winter Traditions
To Top