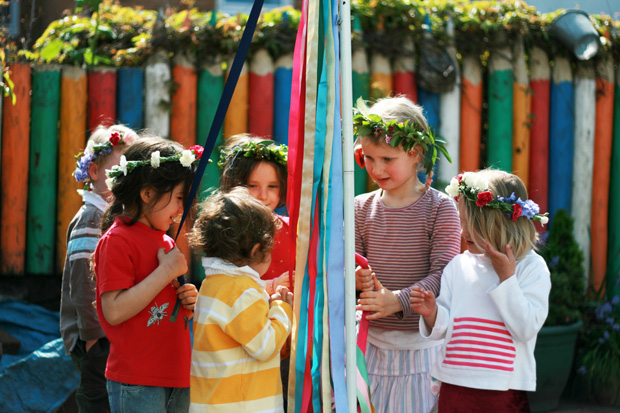 Leela Dutt goes back to school in Llandaff North to find out more about the largest and fastest-growing independent school system in the world. cardiff steiner school

Cardiff Steiner School has moved to Llandaff North! Currently taking children of primary age, the school will grow year on year to offer education up to sixteen. The local community can also hire rooms.

So what’s it like to be a young child in the kindergarten? There’s a secure atmosphere, with two classes of up to sixteen children aged between three and six. Days begin with time outside, often in Hailey Park. Indoors there’s singing, craft and painting. I watched story time: the children sat spellbound on the floor while the teacher told a story illustrated with attractive puppets.

There’s a homely feel to the kindergarten. Bread is baked by the teachers, assisted by the children. Meals are vegetarian, with organic food when possible. There is no reading or writing in kindergarten because Rudolf Steiner believed that children are not ready for this until seven. Instead there is free play, which gives the opportunity for children to develop their imagination and co-operate with others. Some kindergarten children who had seen trebuchet engines at Caerphilly Castle decided to make one out of wood. Instead of lead cannon balls they fired woollen balls, which I imagine were made during craft time.

One thing that particularly caught my attention during the last Open Day: there was a conflict between two children who both wanted to play with the same item, and a kindergarten-aged girl took it upon herself to intervene between them, achieving a compromise. I asked if the children are taught conflict resolution so young, but no – it seems they just learn this by copying their teachers. For example if on a rare occasion a child should happen to hit another child, the ever-watchful teacher will not shout “don’t hit people!” but rather she’ll say calmly, “oh dear, did you forget that hands are not for hitting?”

There are two combined classes older than kindergarten, going up to eleven. The same teacher will follow the children through from six to fourteen. I watched them at work; one class was in a circle enthusiastically learning a round with actions, while in the other the children were sat at a desk or lying on their stomachs on the floor looking up, all totally absorbed in listening to the teacher and in writing in their Main Lesson book which records their year’s work. The ethos of discipline is easy to see throughout the school.

They follow an established Steiner curriculum, with a rich range of subjects based on the stages of child development that Rudolf Steiner identified: including farming, botany and astronomy but also the subjects of the national curriculum. Subjects are taken in rotating blocks called Main Lessons, each of which lasts three or four weeks. The emphasis is on the experience of learning, rather than packing facts into young brains.

If this sounds worth finding out about, there is another Open Day on Saturday 18th May from 11am to 4pm, so why not drop in and see what’s going on?