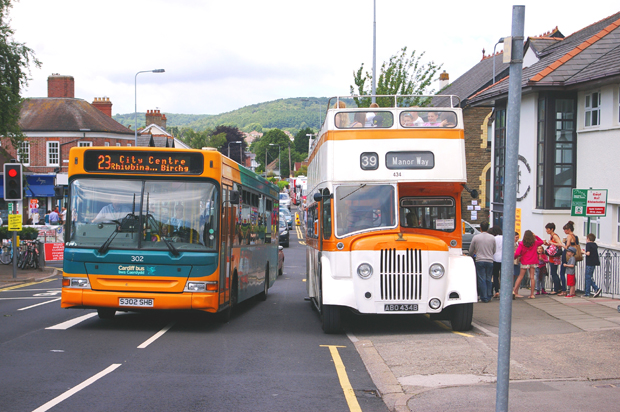 “This is how Mummy and Daddy used to go to school, darling.”, “When did they stop painting them orange?”, “This really brings back the memories!”, “I remember these before they were painted orange.”, “How wonderful that this has been kept!”, “I used to drive these!”, “Is this a Guy?”

Those – all except the last one, perhaps – are the kind of comments and questions you’d expect to hear when the Cardiff Transport Preservation Group brings one of its 40-strong collection of vintage buses along to events such as this year’s Rhiwbina Festival.

The bus in question was the obvious choice for a beautifully sunny day. Former Cardiff Corporation Guy Arab V open-top double-decker 434 (ABO 434B) with a Neepsend (East Lancashire) body is now almost half a century old. Shorn of its roof, everybody who went upstairs was able to enjoy the fresh air and sunshine while those of a certain age could fondly reminisce about the days when a fleet of similar buses (but with their roofs firmly stuck on) used to ply the streets of Cardiff, regularly venturing out as far as Rhiwbina on services 21 and 23.

Even when new in 1964-66, they were rather old-fashioned buses. The modern one-person-operated bus has its engine at the back and its door at the front. Not 434. Its entrance – no door, just an open platform – was at the back. The driver drove in splendid isolation at the front, having no contact with that terrifying breed known as passengers. That was left to the conductor who’d collect the fares, issue the tickets and ring the bell to tell the driver to stop or move off.

Sounds familiar? Yes, exactly like on the London Transport Routemaster! This Guy was Cardiff’s equivalent of London’s famous icon.

Taking 434 anywhere evokes a host of responses and they’re fascinating to see. Some people just pass by, ‘seeing’ nothing unusual. Others look slightly puzzled: they know they’re seeing something unusual but can’t work out what it could possibly be. Others immediately recognise a cherished part of their childhood, or a more recent visit to the seaside complete with a ride on an open-topper.

They’ll then smile broadly at the memory and start waving! It’s a reaction anyone with a vintage vehicle will have seen and enjoyed many times.

Those of us who stood around 434 at the Rhiwbina Festival may have heard most of the comments before, whether made to us or (more enjoyably still!) overheard. But they’re always a joy to listen to because you know that the efforts of the volunteers down at the Group’s Barry depot have achieved their important and immensely satisfying aim of putting people in touch with part of their – and Cardiff’s – history. So many other vehicles have been scrapped and left no trace of their existence except in photographs that may be fading fast.

But there was one question we didn’t expect and you can’t accompany an old bus anywhere without expecting the occasional surprise.

The unexpected question this time was ‘Is this a Guy?’, asked by a lady. Now Guy Motors produced bus chassis in Wolverhampton and the chassis ordered by Cardiff were then driven (with the drivers, poor dabs, ensconced in just a small shed-like affair to protect them from the elements) all the way to Sheffield to the works of bodybuilding company Neepsend, a branch of the then well-known bus bodybuilder East Lancashire.

We’d never expected there to be any connection between Wolverhampton and Rhiwbina, but then the lady questioner explained that her father had worked in a senior position for Guy Motors and that she still had photographs and documents from his time there. Would we be interested?

We most certainly would. So a few days later two of us visited the lady and her husband in Rhiwbina to find that they had a treasure trove of material about Guy Motors unlike any to be found anywhere else in the world.
So the moral is: if you take a vintage bus out anywhere, you never know what you’ll find!