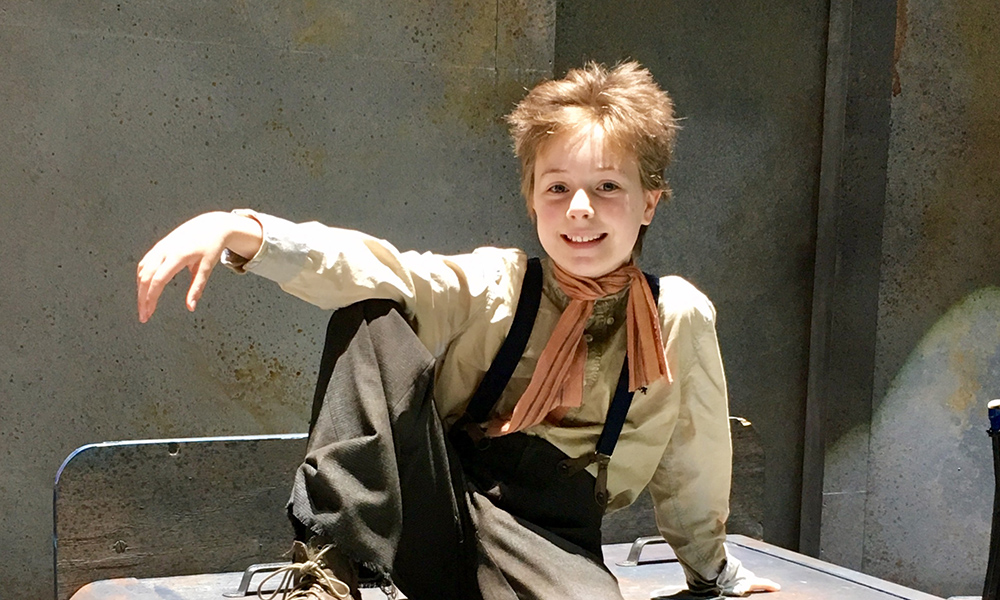 Last December, Rhiwbina’s Louise Harvey was given the chance of a lifetime to perform in a brand new musical alongside West End legends. This is her story.

Like other ten year olds in Rhiwbina, Louise Harvey enjoyed going to school, playing sport and meeting friends. But a chance comment by her piano and singing teacher Glenda Pasley in December last year has given Louise and her family a year to remember.

“Like other children, Louise was going to school and in her spare time, playing team sports including hockey and tennis. She had been attending piano and singing lessons once a week. Glenda mentioned to my wife Sian that there was a new musical in the making called Tiger Bay the Musical, and it was going to be previewed initially at The Artscape in Cape Town, South Africa in May, and would then open at Wales Millennium Centre in November. She mentioned that they were looking for someone with determination and desire to take on the challenge of playing Ianto, a character with an irrepressible spirit and suggested that Louise should go along for an audition.”

Sian took Louise to the audition and waited to hear back.

“We were overwhelmed when we found out just before Christmas that Louise had got the part, and especially the news that she would be spending eight weeks in Cape Town,” says Colin. “Up until that point, the only time Louise had performed in front of other people was with her school choir in a concert at St David’s Hall! As the news began to sink in, the scale of the opportunity soon became apparent, not just to Louise but to all her family and friends.”

“The Wales Millennium Centre production team provided detailed plans for South Africa in the early part of the year and offered Sian the opportunity to chaperone Louise for the eight week period whilst I stayed home to look after Louise’s younger brother James. Sian’s employers were wonderful and allowed her the time to accompany Louise in Cape Town, and our wider family and friends were tremendous in helping me look after James.”

Louise’s school Ysgol y Wern were extremely supportive towards the whole experience and recognised that this was a unique educational opportunity.

Louise made her debut musical performance in Tiger Bay the Musical in May in Cape Town where she shared the role with Ruby Llewelyn from Llantrisant. She plays the part of Ianto, an orphan dreaming of a better life. One of a gang of waterboys, Ianto spends his days helping the dockers (known as Donkeymen) in return for food and protection from the many dangers they face. West End and Broadway star John Owen-Jones plays the role of the Third Marquess of Bute in the musical that’s set in early 1900s Tiger Bay in Cardiff. The world premiere of the musical will be in November this year at Wales Millennium Centre.

The show, produced in association with Cape Town Opera, is a Welsh story of courage, reconciliation and love, built from the thriving multicultural community which still exists in Butetown today.

“Cape Town gave Louise some invaluable life experiences including a memorable trip to Robben Island to learn about apartheid,” says Colin. “She is extremely grateful to work with such a professional cast and production team who have nurtured her every step of the way. She would like to continue working in the musical theatre industry. Who knows what the future has in store?”

Tiger Bay the Musical is on at Wales Millennium Centre from the 13th November – 25th November. Louise and Ruby Llewelyn will alternate as Ianto, with Louise performing on the following dates: