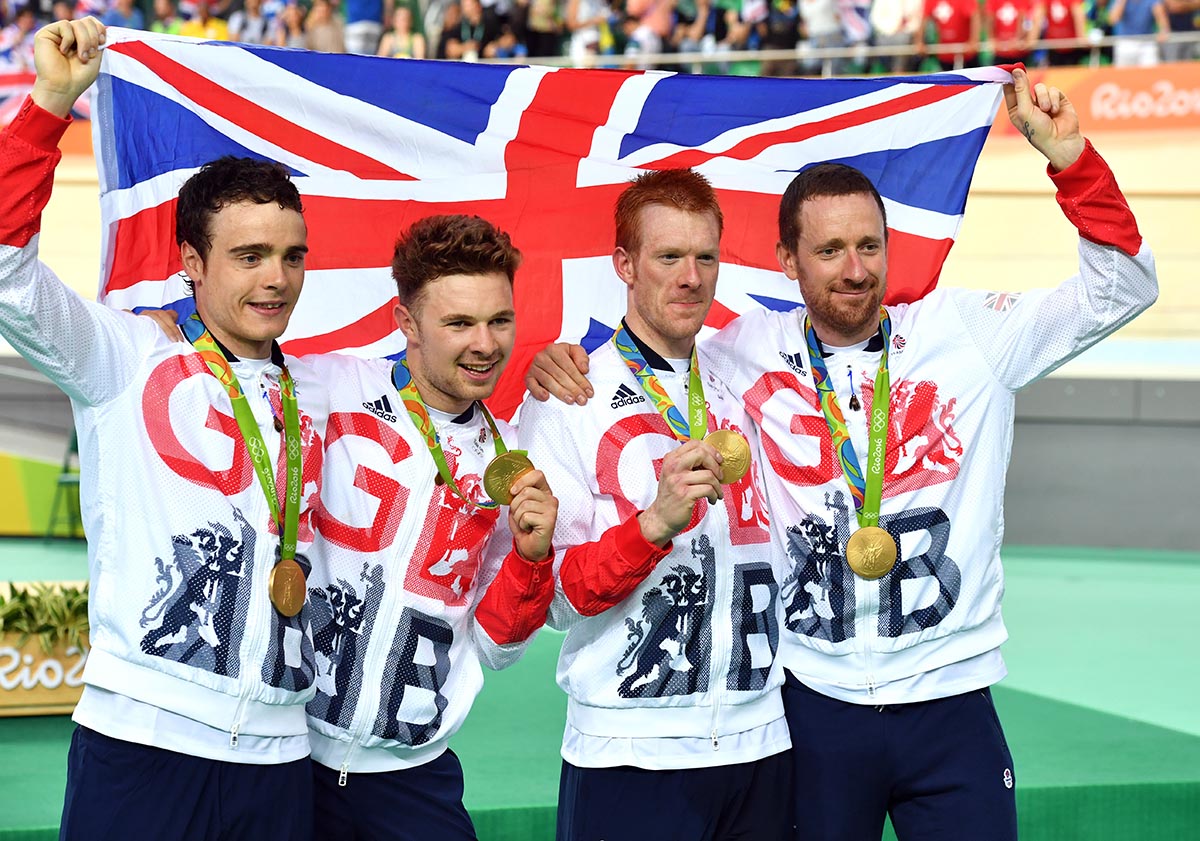 A date that Cardiff’s Owain Doull will never forget, as he took Olympic Gold in the Team Pursuit in Rio alongside his teammates Sir Bradley Wiggins, Steven Burke and Ed Clancy. It was a dramatic final against the Australian team that gave Owain his first Gold medal at his very first Olympic Games.

But how did it all start for the 23 year old from Llanishen who spent much of his childhood in the North Cardiff villages of Rhiwbina, Whitchurch and Llandaff?

“I used to play quite a lot of sports in Whitchurch and Llandaff as I was growing up, but I always knew I would ride my bike. Luckily for me, I got started at the Maindy Flyers when I was around 14, got half decent and enjoyed it enough that I thought I would like to make a career out of it if I could, and I went from there.”

In less than 10 years since starting at the Maindy Flyers on the outdoor track of Maindy Leisure Centre, Owain has become an Olympic Champion.

“I came into cycling relatively late. A lot of people have been racing all over the country since they were 6 or 7.” He credits much of his progression to the Welsh development system and his old club in particular.

“There are a lot of good clubs like Maindy Flyers that can help you out massively. I owe a lot to them.”

As for his initial interest in cycling, Owain recalls family days out on their bikes cycling around Cardiff:

“We used to do mountain bike rides and cycle on the Taff Trail and it went from there that I thought I would like to give it a bit more of a go.” Once Owain had made the decision to focus on cycling as a career, his parents were massively supportive.

“I remember we did one cycling holiday where we cycled all over France,” Owain laughs as he recalls the memories. “My brother and sister weren’t too happy about it, but my Mum and Dad enjoyed it!” Owain’s dedication to cycling seems to have fuelled his family’s passion for cycling.

“Now my Dad’s got the bug, my Uncle’s got the bug and all their mates too, they’ve got their own group and go out on a Sunday. It’s really nice to see cycling growing in popularity.”

After years of training, Owain secured a place to go to Rio, his first Olympic Games. So what did the man from Cardiff anticipate was going to happen?

“Going in, off the back of training and everything we had been doing, we knew we were in really good shape. We broke the World Record a couple of times in training, so we knew that we were in peak physical condition, but obviously you never know what the other team is going to do. It was more excitement than nerves. We knew that we were in such a good place that we just wanted to get out there and perform and luckily for us, we won!”

On the evening of the final, there was a lot of expectation for the foursome, including an added anticipation that Sir Bradley Wiggins was going to take his fifth Olympic Gold medal and eighth Olympic medal in total, which would put him ahead of Sir Chris Hoy’s tally of seven. But did Owain really expect them to take the gold?

“A couple of weeks before, we thought someone’s going to have to do something pretty special to beat us here, because we knew from the times and the data we were producing that we were in for the ride of our lives across the whole team.”

The team from GB ended up finishing in just under a second faster than the Australians, securing a new World Record in the process.

“I think we would have preferred to have had a bit more of comfortable margin, but a win is a win so we can’t complain too much!”

“It’s nice to win but to get the World Record too; it’s another bonus to know that the four of you are the best four in world and the quickest that anyone has ever been.”

It’s hard not to ask what it was like to win gold alongside Sir Bradley Wiggins himself:

“It was crazy, a lot of people asked me beforehand ‘do you feel pressure?’ Obviously having Brad in the team, everyone assumes that Brad is going to win. So it’s the opposite really, because when you’ve got people of Brad’s calibre, and Ed Clancy and Steven Burke, and they’ve all won the event before, you don’t really feel pressure. It gives you confidence more than anything, because you know you’re lining up with the best three guys in the world at what they do, so you think, ‘I’d rather have these guys in my team than anyone else’. It’s nice to know they’ve got your back, so across the board it’s a pretty special experience.”

And as if an Olympic Gold medal and world title wasn’t enough, Owain also won Wales’s first gold medal of the Games.

“I managed to sneak it first, which was quite nice! Obviously, Wales did unbelievably well at the Games anyway, but it was nice to get the ball rolling.” It’s clear that succeeding for Wales means a lot to Owain.

“Someone actually told me afterwards that I am the first ever Welsh speaking gold medal winner. That’s makes me really proud!”

Team GB had unprecedented success in the cycling in Rio. Owain explains:

“They’ve got a tried and tested template which they’ve repeated over the last Games from Beijing to Rio, so it’s 12 years of dominance. Everything is geared towards the Olympics. We’ll happily sacrifice World and European Championships just to make sure that when it comes to those Olympic Games we are the best we can possibly be. I think that’s a concept which is quite hard for a lot of other nations to understand. A lot of their funding comes off the back of the World Championships but ours is funded off the Olympics, so we are in a fortunate situation where the Worlds aren’t as important. They still hold a big place obviously, but the focus is always on the Olympics.”

So what does Owain’s family think of his success?

“I don’t think it’s really sunk in for any of us. I was very lucky that my Mum, Dad, sister, brother, aunty and uncle were out in Rio so they were there on the night, so I got to see them minutes after winning. I think we were all as shocked as each other. It was a really special moment that I will never forget for the rest of my life and I don’t think they will either.”

Owain recently completed the Tour of Britain which brought him back through Wales and gave him an opportunity to see his family again.

“My Mum loves cycling so she had most of the week off. She booked it off specifically so she could watch most of the racing around the UK. She had her own Tour of Britain as it were! So it was nice to see her after most days. The reception I got from everyone in Wales during the tour was a lot more than I expected. Loads of people were queuing outside the bus for photos and signatures, and everyone was shouting my name as I was riding along – it was a bit surreal but it was nice.”

Owain signed for Team Sky in May and now plans to focus on switching from the track to the road.

“That’s what I’m going to focus on for the next couple of years, and then leave that for a few years and potentially come back for Tokyo. The next couple of years I want to try and do as much I can on the road – follow what Geraint Thomas has done in the team.” An Olympic Gold and World Record has not done anything to dampen Owain’s ambitions:

Not bad for the boy who used to cycle around Rhiwbina on his bike.

“When I was growing up, a lot of my friends lived in Rhiwbina so I’ve got a lot of fond memories of after school, tearing around on our bikes around Rhiwbina near the tennis courts, not far from where my Mamgu lives.”

He reflects on his memories of the village:

“Most days after school we’d go back to my Mamgu’s. It’s a really nice area and I’ve got a lot of fond memories of growing up there. What I loved about Rhiwbina was the general relaxed feeling; I was always a bit jealous living in Llanishen to be honest, as all my friends in Rhiwbina lived so close to each other and it is such a relaxed place.”

After living in Manchester for the past six years, Owain is now looking forward to returning to live in Cardiff in November.

“I miss seeing friends and family – it’s the little things.” After his travels to the other side of the world, Owain appreciates even more what Cardiff has to offer.

“Cardiff is great as there is enough going on but it’s still small enough at the same time.”

There will be a welcome waiting in the hillside for him, we’re sure.