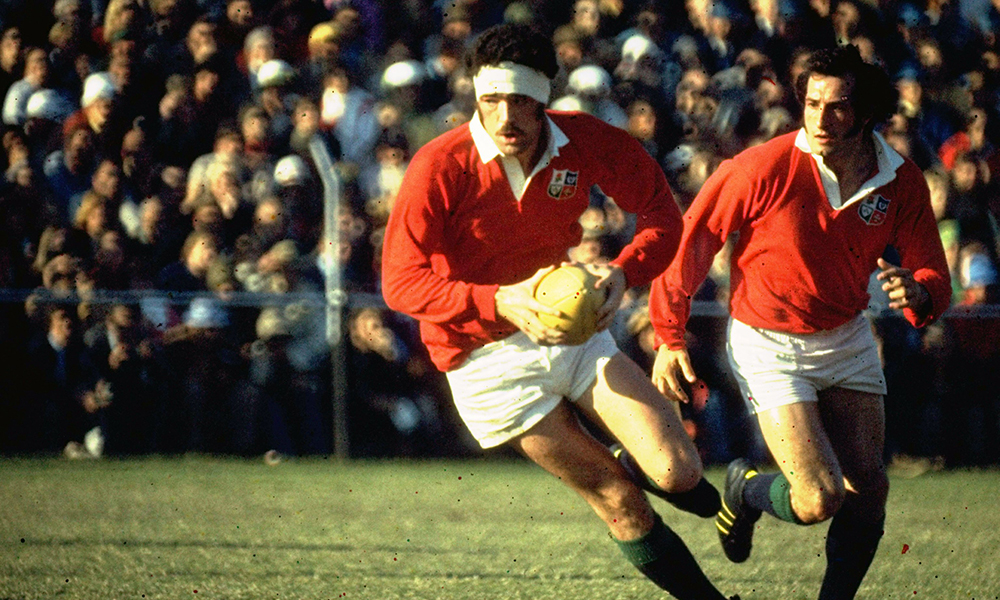 If I could ever guarantee a big rugby name for one of my interviews, I knew where to head. Only a year earlier, I’d had the pleasure of speaking to John Dawes at The Butchers Arms in Llandaff. Merv was there that day.

I headed down to the pub and cheekily asked for another interview with one of them. It was a toss-up between Merv and Barry John. I’m not sure if any of them, Merv included, knew that he was in fact suffering from cancer. Barry John told me that I could do him next time and it was right for me to speak to Merv.

Mervyn was honest and frank about rugby. As far as he was concerned, he’d been there and done it and now had little or no interest in the game. I was quite taken aback by that. Merv’s deep voice still resonates inside my head. He was a giant, quite literally and he’d stoop ungainly on the edge of the short bar stool as we spoke. I could tell that he smoked, from both the smell on his jacket and from the stains on the tips of his fingers. I was glad I met him. He was a bit of a cult hero of mine. Quiet, and with that moustache and headband, he’d do all the talking on the pitch.

As an aside, when I left the pub, I was driving past the pub when a chap who had been sat there drinking with the group emerged into the sunshine .He promptly dropped to the floor. Only a few days earlier, I had seen another old man drop to the floor in front of my eyes in exactly the same way when I was out in Whitchurch. Sadly, the man in Whitchurch passed away, despite my attempts to revive him. Seeing this old boy on the floor scared the living daylights out of me. Surely this couldn’t happen to me twice in one week?

I jumped out of the car but by the time I got to him, the old man was back on his feet, much to my relief. He said he’d slipped. Too many beers I think. Barry John appeared with a worried face and I told him that I’d take his friend home. I can’t remember his name but he seemed to have his own incredible history!

I believe that this interview is the last-ever one given by Mervyn Davies for publication.

The craggy features on the face of Merv ‘The Swerve’ Davies are very much the same as they were in the ’70s. Hands like shovels and shoulders as broad as the Tawe, his 6ft 3 frame sits awkwardly on the pub chair. Opposite him is John Dawes, architect perhaps of the legendary Golden Period of Welsh rugby. To his right is Barry John, regarded by many as the finest outside-half of all time. Mervyn’s famous Mexican moustache has long gone, and his deep, dark eyes crawl around the historic sporting pictures on the wall of The Butcher’s Arms, Llandaff, as he recalls his childhood in Swansea.

“Penlan County School was a new school. There wasn’t a blade of grass in sight so we all played soccer. It wasn’t until I passed my 11+, that I tried my hand at rugby. The school had no history of sporting or academic success and I had no recognition for anything I did there. I went on to do teacher training, and moved to London to ply my trade as a school master. I played for Old Guildfordians where we played some god-awful rugby.

“I then joined London Welsh in 1968. The team was full of talent and quickly became renowned for its free-flowing style of rugby. JPR and Gerald were there. We were hated on both sides of the bridge of course. The English hated us because we were those ‘Welsh bastards’, holed up in their country; and the Welsh hated us because we’d sold our souls to the English. We became everyone’s target.

“But you’ve got to remember that this was the late ’60s, the age of flower power, magic mushrooms and free love. Life was good – for me at any rate.”

Mervyn’s first Welsh cap came in 1968 against Scotland at Murrayfield, which Wales went on to win 17-3. “I don’t remember much about the game. JPR Williams, who was with me at London Welsh, was getting his first cap too, so there was a great sense of camaraderie between us both. We were both in it together. The memory that sticks with me the most is simply standing on the pitch and thinking “Is this really happening to me? I’d come from total obscurity, having only joined London Welsh six weeks earlier, and yet here I was, stood on the pitch playing for Wales.

“I had one objective that game, and it became a philosophy that I took into every game: to eliminate errors from my own performance. We won the game and I never got dropped after that.”

Mervyn went on to play 38 consecutive games for Wales until 1976 (when his career was cruelly cut short by a brain haemorrhage during a club game for Swansea, which he had joined in 1972). During this time, Mervyn won two Grand Slams and three Triple Crowns.

Mervyn unfurls and lets out a great roar of laughter at the suggestion that he has been cited as the Best Ever Welsh captain. “Did you hear that John? Best-ever captain of Wales!”

John Dawes, sat opposite him, splutters on his drink and spits it back into his glass. “You’re joking aren’t you? I can think of at least 10 or 11 better captains than him!”

“Times were tough back in the ’70s you know. The nation was going through a lot with industrial unrest. There was a hell of a lot of expectation on us as players, and on me as captain to succeed. It was an added incentive if you like, but it was hard on us. If we did lose, the nation would go into mourning.”

The pressure was cranked up even further when Mervyn was selected to play for the 1971 British and Irish Lions tour of New Zealand. But as a hard-runner and an aggressive tackler, Mervyn had the handling capabilities to link forward and back play, and keep the Lions on the front foot against formidable opposition. His abilities at the back of the lineout prompted New Zealand legend Colin ‘Pine Trees’ Meads to claim that the Welshman had the All Blacks ‘donkey-licked’ during the Lions’ only ever series win in New Zealand.

Mervyn also toured on the infamous 1974 tour of South Africa, which again, was a success for the tourists. “Playing for the Lions, is for any rugby player, the zenith of their career. 40 years since the ’71 tour to New Zealand, it’s sometimes mind-boggling to think that no other team in history, either before or after, has won a series in New Zealand. To be part of an achievement like that is such an honour – it can’t be taken away from me. It was also unique in that this was a time when rugby was amateur. You had to have an understanding employer, which was fortunately something that I had in my teaching career. But spending 14 weeks away from home meant that for the first time, we could focus purely on the rugby. We felt like professionals, even if we weren’t paid. We could hone our skills and taste what it was like to live as a rugby player.”

As Mervyn is speaking, Barry John pick-pockets Mervyn’s bus pass from his jacket and passes it round like a naughty schoolboy. Mervyn’s giant hand swoops down and swipes the pass clean out of Barry’s hand. Age has not slowed the deftness of his handling abilities.

“Rugby is a distant memory. I’ve been there, done that. Got the T-shirt. I’m not an avid supporter of any particular team and for me watching the game is way down on my list of life’s pleasures. That’s not to say that I dislike the game. The proud tradition of Welsh rugby will continue forever and good luck to them.

“But for me, the game is about abiding memories – mostly sounds. The noise that the crowd generated was a physical thing. It would pick you up and move you, sweep you across the field, and carry you across the park. During breaks of play, you’d stand there, literally swaying in the swirling concoction of noise. It is something that will stay with me forever.”