“I’ve got very vivid memories of Castell Coch. I was brought up in Kidwelly in West Wales but before long, we all upped sticks to live in London. Dad was an opera singer, plying his trade at Covent Garden. Quite often, we’d head back down to West Wales and from the back seat of the car, I’d look out, see Castell Coch, and know that we were not too far away from the place we called home.”

Critically-acclaimed singer-songwriter Judith Owen now lives in the USA, but life wasn’t always like that.

“I guess my childhood had a lot to do with what I do now as an adult. I always say that my mother was the reason I sing, and my father the reason I can sing. My mum’s depression was something that no one spoke about in the family. I spent a lot of time with my father while he worked – I often found myself back stage at the opera or playing around on the piano. I got to play the piano from about 4 years of age, and although I was never going to be a concert pianist, I found that I could express things I couldn’t do otherwise, especially as I struggled with dyslexia. I found my joy sitting at that piano.”

She was 15 when her mother committed suicide and it was an event that changed Judith’s life forever.

“How does anyone get over anything like that? I turned to music to express my grief and sadness. For me, music was a form of escape from the guilt, the shame and the pain. I’ll spend the rest of my days with that sadness in my life.”

It was while Judith was going through some of her darkest days that she received a blessing:

“I was singing in a jazz bar in London. At that time, I was terribly depressed. I’d just finished my set when I looked down and saw Harry Shearer from the movie Spinal Tap. He was stood there, applauding along with Christopher Guest and Michael McKean. They’d just finished some gig and beckoned me over – they were still in full costume. Harry asked if he could be excused to go change and when he came back, he looked exactly the same!”

Judith and Harry got talking. Three weeks later, she was flying out to live with him. 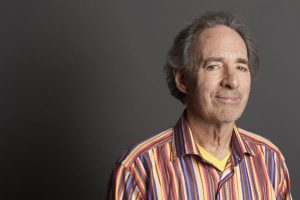 “Meeting Harry was a life-saving experience for me. It was certainly one of those ding-dong moments that happens to people on very rare occasions.”

The pair set up home and a record label, and she launched her first North American album, Emotions on a Postcard, in 1996. Five albums later, and Judith is once again launching a new album – and this time, it’s a more reflective piece of work.

“I was crossing the street in New York not too long ago when this woman caught my eye. She was a homeless woman and the only thing she had to keep her feet warm were plastic bags. It was a freezing day and like most people, I just carried on past as if I hadn’t seen her. The image of that woman stuck with me and I began to feel a little ashamed of myself. It got me thinking that this was somebody’s child sat there on the street. Harry and I don’t have children but the thought of it kept coming back to me. It made me think about the bigger picture of life and it was as if I was suddenly woken up to the reality of the world around me.

“My new album is called Somebody’s Child. It’s an album about what matters in life. We all tend to rush through life but miss out on the really important things. If something affects me, or moves me, I try to work it all out with music, as I always have done. This album is me outside of myself.”

Judith has amassed a huge fan base in the US, with her albums and tours being lauded by The New York Times and the LA Times among others.

But it’s here in Wales that Judith considers home.

“Even the thought of Wales makes me tremble with joy. If I think now of heading back down the M4, past Castell Coch and down to the west, it makes me yearn so much. I think it must be the Welsh hiraeth in me! There’s nothing better than the green, green grass of Wales.”

And what does Harry think of her mother country?

“Harry loves it. I brought him back once and took him to visit Llanelli Market. I was hoping to show him the real sense of atmosphere by getting some Welsh cakes in.

“We sat down next to a group of women, who were all talking over each other, and I just told him to listen to them. He said that they sounded like a tree full of birds.

“We then drove across Wales and Harry was attempting to read some of the place names. He did okay on some but he’s yet to prove that he can do a good Welsh accent.”

Judith will be heading home in November as she stops off in Cardiff on the latest leg of her UK tour.

“I urge people to come along. My shows are always a bit of a roller coaster, as much of it is rather serious but then we do have a laugh in between songs. It’ll be a time to relax, switch off and just enjoy yourself.

“Some of my songs, like a large percentage of Welsh songs, are written in a minor key. It adds a sense of sadness and yearning to them. I like to think that my audience feel great emotion during my concerts but that’s a good thing because we are all emotional being aren’t we?”

Judith’s music reflects her Welsh roots and her family upbringing.

“We can find great sadness in music but at the same time, we can find great joy. I still suffer from those depressive feelings that I’ve battled with all my life and the anxieties that it brings. But through music, I have been able to find myself, express myself, and hopefully entertain others.”

The fact that her show will be in her native country will mean that it has special meaning, both for the audience, and for Judith herself.

Judith will be appearing at The Gate, Keppoch Street in Roath on November 17th.