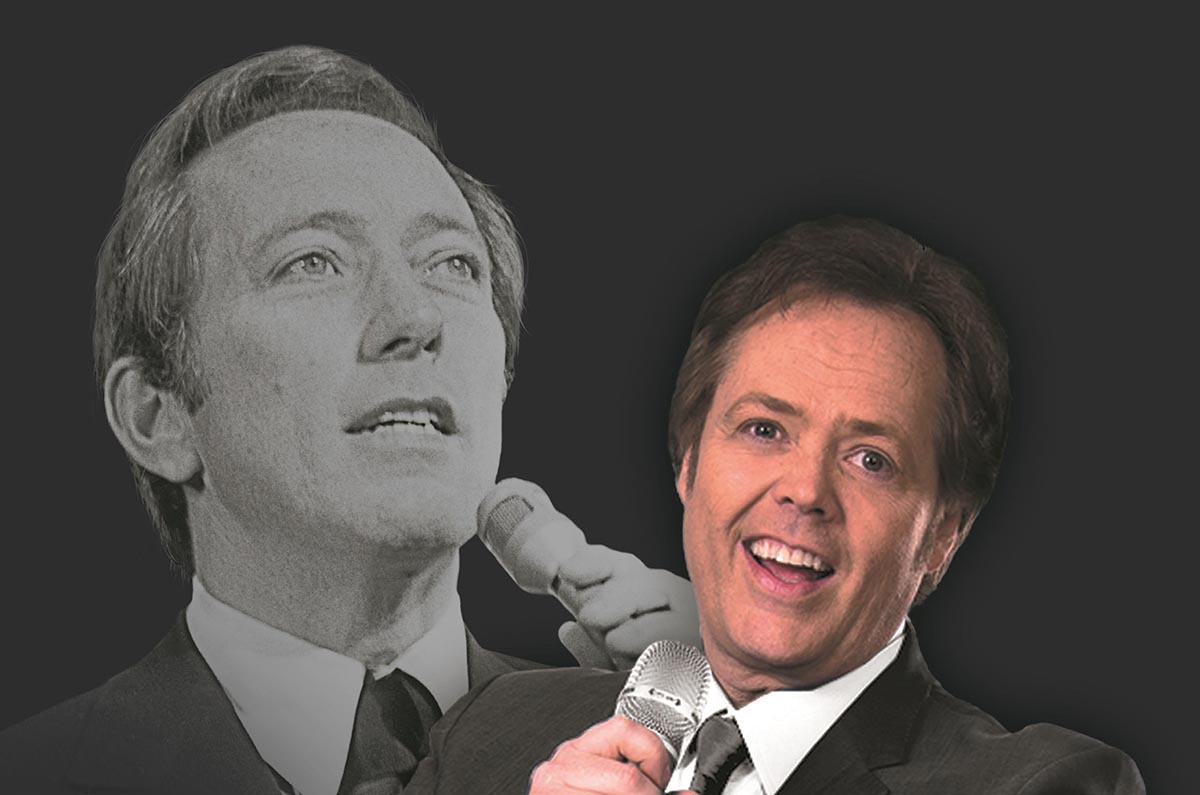 Andy Williams was a close family friend. In fact, we considered him a part of our family. My mom was into genealogy and she was always pointing out how both we and Andy had Welsh connections. He was very much into that and he always found it cool that he had a link to Wales.”

Celebrating 50 years in showbusiness, Jimmy Osmond is casting his eye back to the start of his career – and his Welsh roots.

“I had great-great-great-grandfathers on both sides of the family that hailed from Wales. On the one side, Dr John Martin was a surgeon at Merthyr Steelworks. He saved hundreds of lives and often had to go down into the mines to perform amputations on the miners.

“We do a lot of charity work for hospitals these days and it was a lovely surprise to discover this member of our family was a surgeon. I was also preforming in Llandudno one year and found out that another of my relatives was from the area. I love coming back to Wales – it’s a place that all of our family can connect with.”

Jimmy began his performing career at the tender age of three with Andy Williams on his television series.

“We were discovered by Disney.

While the original line-up of my brothers were performing on a televised Disney special, Andy Williams’s father saw them and told Andy to book them for his television shows.”

The Osmonds earned the nickname ‘one-take Osmonds’ among staff due to their professionalism and tireless rehearsing. Donny soon joined them on the show, making the Osmond Brothers a 5-member group. Marie and Jimmy were also introduced on the show as the years went by. During this time, the Osmonds also toured Europe, performing with Sweden’s most popular singer, Lars Lönndahl, and even releasing a single where they sang a Swedish version of ‘Two Dirty Little Hands (Fem smutsiga små fingrar).

The Osmond Brothers were regulars on the Jerry Lewis Show in 1969 and they continued to tour and perform with Andy Williams. But soon the Osmond Brothers decided they wanted to perform popular music and shed their variety-show image. They wanted to become a rock and roll band. The change was a difficult one for their father, who was suspicious of rock and roll. But he was persuaded and the boys began performing as a pop band.

“We were raised in such a unique way. We did a lot of variety shows but we were lucky in that we managed to avoid most of the pitfalls that come with fame,” adds Jimmy.

With their clean-cut image, talent, and energetic pop-rock sound, the Osmonds toured to crowds of screaming fans in the US. They even had their own 1972–1973 Saturday-morning cartoon series The Osmonds on ABC-TV. By this time, the Osmonds had broken through in the UK as well. Counting group and solo recordings, members of the Osmond family charted 13 singles on the UK charts during 1973. Some observers coined a new word, ‘Osmondmania’, to describe the phenomenon, by analogy with the similar ‘Beatlemania’ of nearly a decade earlier. The same type of hysteria was generated at their concerts during this period.

But changes and challenges soon arrived. The older boys were of an age to go on church missions, yet they believed they could reach more people through their music. They recorded an ambitious album in 1973 called The Plan, perhaps best described as a Mormon concept album with progressive rock aspirations.

But music has always been just one part of Jimmy’s life.

“I’ve always loved cooking and I do a lot of cooking at home. I’m not one to be afraid to try new things, so when the opportunity of Masterchef UK came up, I was all for it. TV shows like this (and I’m a Celebrity, Get Me Out of Here!) really push you and it’s those sort of experiences that I really enjoy. Very often, you walk away with new friends but you also take on new life experiences and in this case, new life skills.”

The real reason Jimmy has got in touch of course, is to promote his new tour. He will be visiting Cardiff in October with his new show, Jimmy Osmond: Moon River and Me.

“The idea for the show actually came from Andy himself. It was to be a DVD and Andy went through his archives, pulling out his favourite songs and putting together stories associated with them. He reached out to me before he died and asked me to keep things going. He wanted to be remembered for his music. In the end, I produced the show as a one-off Christmas special – I produced it in the way that he’d taught me.

“Due to its success, we then gave ourselves 5 dates to start with and that’s already grown to 27 dates in the UK alone.”

“Everyone loves that 60s vibe and the show is the only authorised Andy Williams one in existence. I don’t try and mimic Andy but I do try to add my own style and I hope that people will like what they hear,” says Jimmy.

“Andy was the best. The reason his show was so good was because he surrounded himself with the best choreographers, the best costumes; he picked the best in everything. I started working with him at the age of 3 – which is 50 years ago now.”

Jimmy and his band come to Cardiff after touring around America and other areas of the UK.

“I’m flying off to Florida in the morning. After that, we’ve got Vegas and then we go on to Indiana. I’ve been to Wales plenty of times but I always love coming back.

“This show pays tribute to my mentor and lifelong friend, whose television show gave our entire Osmond family a platform to launch our careers.”

We’ve teamed up with Jimmy’s promoters to offer you the chance to see the man himself in concert. Jimmy is appearing at St David’s Hall on Monday 3rd October and we have a pair of tickets to give away to one lucky winner.

Jimmy will sing the songs that made Andy Williams so loved by millions, including Music To Watch Girls By, Happy Heart, Can’t Take My Eyes Off You, Almost There, May Each Day, Days Of Wine And Roses, and, of course, the song that was to become his theme tune, Moon River. All you need to do is send your name, address and contact number to SDHpress@cardiff.gov.uk by Friday 23rd September at the latest. Good luck!