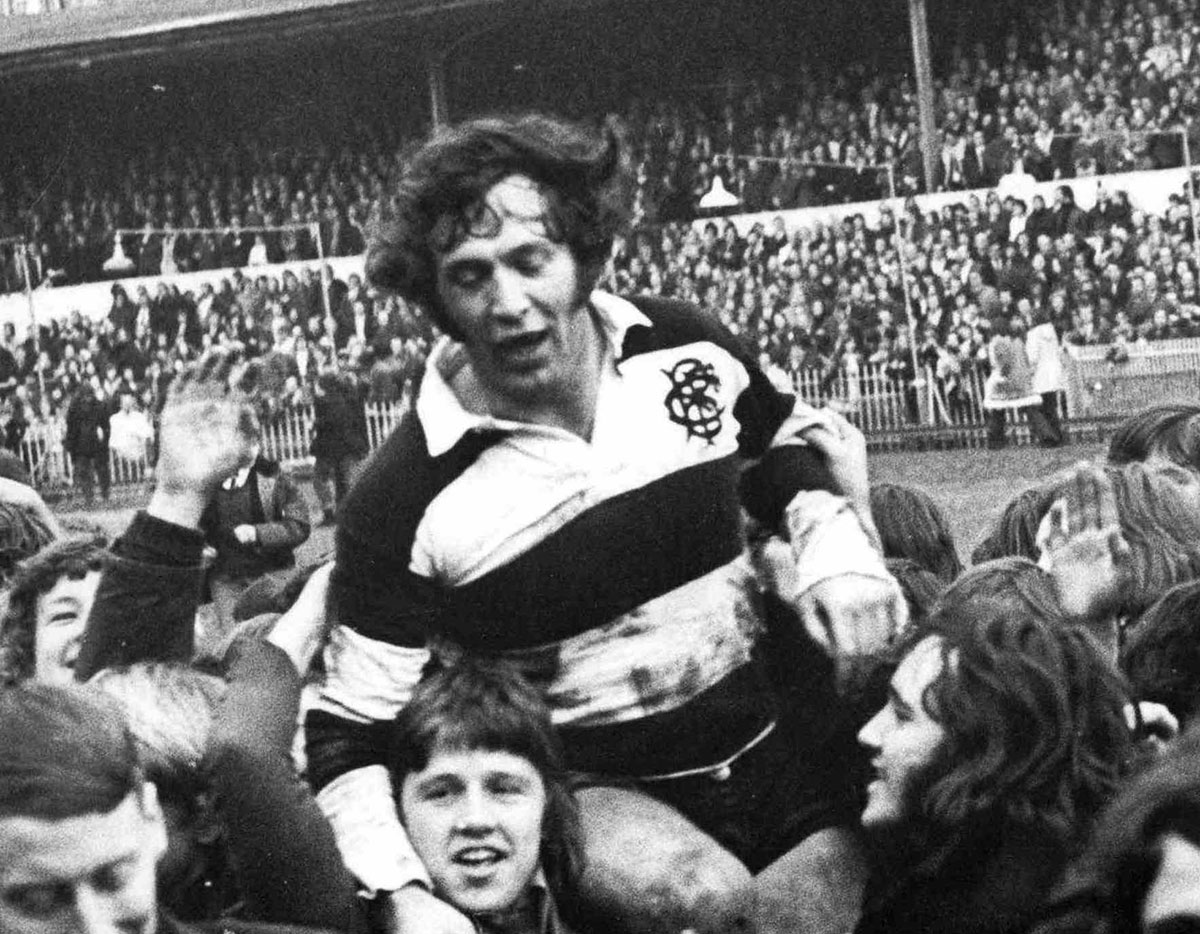 John Dawes, former Wales and Lions player and coach, is taking centre stage as usual. Flanked on either side by Barry John and Mervyn Davies, Dawes is talking tactics.

Except this is not a colourful, riotous scene at the Arms Park on an international day. Nor is this being played out on some hostile New Zealand pitch far away from home. Instead, this team talk is taking place amid the gentle banter of the Butcher’s Arms in Llandaff on a grey winter’s day.

The three rugby legends are sat enjoying a pint on an icy January afternoon. The talk has turned to Wales’s chances in the Six Nations this year. Mervyn Davies eventually gets to his feet and towers over us.

“I’m popping outside gents,” he announces, pulling on his sheepskin coat and stepping outside. Barry John flicks through a past copy of Whitchurch and Llandaff Living that is lying on the table in front of him, and he asks after his old pal and team-mate, Howard Norris.

John eventually takes us to a quiet table so he can unfurl his prestigious career in his own words.

“Soccer was always my first sport as a child. In fact, it wasn’t until I went got to Pengam Boys School that I was first introduced to rugby. I started off as a hooker and it wasn’t until I left school and started playing for Newbridge that I actually played at centre.”

Born in Chapel of Ease in Abercarn, John Dawes will always best remembered for his exquisite on-field skills as well as being a master tactician of the game.

“I went to university at Loughborough and eventually moved to London where I became a chemistry teacher. London Welsh in those days was a flourishing side, with many of the greats playing for us – Mervyn, Gerald, JPR and the like. There were no official leagues as such back then, but London Welsh was considered at the top echelon of rugby sides. The crowds that were packed to the rafters were testament to the type of exciting rugby we played.

“My first cap for Wales came in 1964; we were in Dublin and there were no replacements allowed back then. DK Jones, the former Llanelli and Cardiff player dropped out and I was brought in. I was fortunate enough to score on my debut. The commentator said that I was ‘revelling in an outstanding game’ but I’m not sure which game he was watching as I only touched the ball twice throughout the whole match!”

Dawes went on to captain Wales to a Grand Slam in 1971.

“Winning a Grand Slam in the Five Nations was such an achievement. It was practically unheard of, but we had such a great team full of fantastic players.”

1971 was also the year that Dawes was appointed captain of the British and Irish Lions Tour of New Zealand. The tour was a success, and to this day, is still the only Lions team to have beaten the All Blacks on a tour. Dawes’ skills as a playmaker proved a pivotal role in their success.

“The tours of 1971 and the subsequent one of New Zealand for which I was coach in 1977, could not have been any more different from each other. As a player under coach Carwyn James, we enjoyed glorious sunshine. We never got wet. In 1977, we never stayed dry. The weather was awful. The two New Zealand teams were also grossly different to each other. For that reason, we had to adapt our skills and strengths. As it were, we went down 3-1 in the series in ‘77 but we did run them very close!”

Dawes had retired from international rugby in 1971, but did lead the 1973 Barbarians to their famous win over the touring All Blacks. Dawes played a starring role in ‘that try’, widely regarded as the best-ever try to have ever been scored on a rugby field.

Dawes went on to become the Welsh national coach from 1974 to 1979. The team has gone down in rugby folklore for its collection of Five Nations silverware.

“I went on to become the WRU coach organiser throughout the nineties. Rugby has been my entire life. It’s been good to me and I hope that I have been good to it.”

John Dawes will go down in history as one of the all-time rugby greats. He will also go down as one of rugby’s true gentlemen – and a modest one too.

“I had a lot of help from the great players around me. The legends that came out of that era are still remembered and spoken about fondly today. But I also learnt a lot from the players I played against. I got to play against the best players and teams in the world. You’d be foolish not to learn from another team.”